This new weekly blog series, published each Friday evening, will feature five films from streaming services which you can access for free using your library card. The five selections this week feature characters struggling to fullfill their desires in the midst of hardship and personal crisis.

Hopefully these movies will help you escape the boredom of social distancing while also connecting you to that determination to keep pressing on, the worries of each day sufficient in themselves, as we're in the midst of a global crisis unlike any in recent memory. Our fight against Covid-19 transcends borders and languages and so this selection of films is international, set in Kingston, Naples, Tehran, New York City and Hubei province in China whose capitol Wuhan was the epicenter where the pandemic we face first became known. 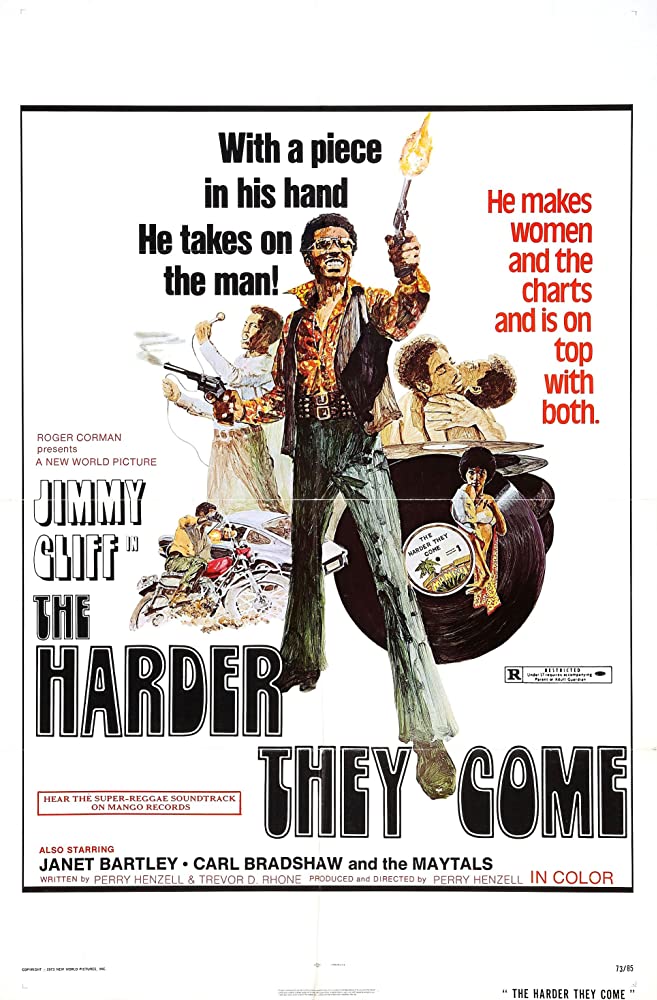 The Harder They Come – This reggae opera helped introduce its star Jimmy Cliff (who turned seventy-two on April 1st) and the music of Jamaica to the world. Cliff stars as Ivan, a young man from the countryside who comes to Kingston looking for fame and fortune. A montage shows Ivan failing to land a series of odd jobs, while “Many Rivers to Cross” plays. He eventually records “The Harder They Come” in a triumphant session, but the villain record producer gives him a raw deal and promises to suppress the song. After shootouts with the corrupt cops Ivan becomes a folk hero outlaw on the run and his recording rises to the top of the hit parade. People from all around the city are shown listening to the title song on handheld radios. As the entire police force scrambles to track Ivan down he taunts them with a series of graffiti messages: “I was here but I disappear”; “I was here”; “here”; “see me here”; “I am everywhere.” Several beautiful scenes including one where the hero hijacks a white convertible for a joyride in an open grassy field while “You Can Get it if You Really Want it” plays. Bonnie, Clyde and Ivan. Available to stream on richlandlibrary.Kanopy.com 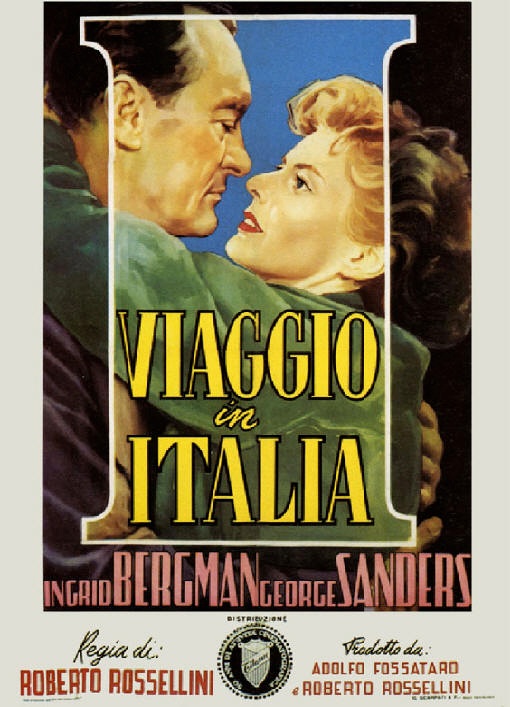 Journey to Italy [sic] –  Ingrid Bergman and George Saunders star as a married English couple on an Italian vacation in this justly renowned classic by Roberto Rossellini. Their marriage seems doomed, as they land devastating critique after biting comment in a pugilistic battle devoid of tenderness and respect. Their bickering could be oddly relatable to those feeling cooped up too long with their partner in our restricted pandemic routines. However withering the characters words and looks may be these two independent, mutidimensional persons refuse to be shoehorned into any ordinary Hollywood plot. Prepare for the movie to wander around from scene to scene, following George as he searches for an occasion for infidelity and Ingrid as she visits museums and tourist attractions like the unforgettable Fontanelle cemetery where the skulls from the unknown dead of centuries ago have been gathered together for popular devotion. Eventually the pair, teetering on the edge of divorce, visit Pompeii and in the car ride home are halted by a religious procession of thousands of sick and crippled Napolitanos before a miracle changes everything. Nota Bene: this picture has been called by an improbable number of names over the years but in English has been most widely called Voyage in Italy. Regrettably, searching for that title on Kanopy won't return any results, so lament the decline of shared language in the privacy of your heart before bowing to the contingent exigencies of marketing.  Available to stream on richlandlibrary.Kanopy.com 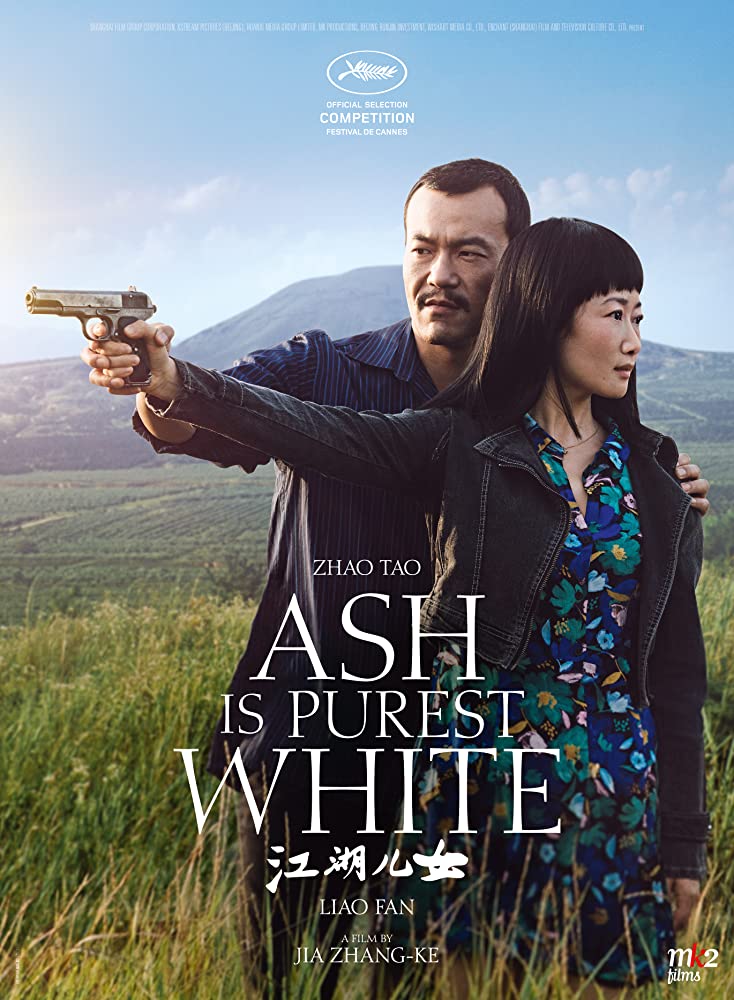 Ash is the Purest White – This recent drama gives a unique window into contemporary Chinese life and into the Chinese criminal underground in particular. Qiao has it all figured out, running a gambling parlor and in love with her gangster boyfriend Bin who she dances with euphorically at a club while the Village People’s YMCA plays. Suddenly a rival gang on dirt bikes ambush the couple and Qiao fires Bin’s illegally owned gun in the air to frighten the gang away, knowing the police will certainly catch her in the middle of the busy streets. After years spent in prison where she refuses to rat out Bin, Qiao travels by riverboat to the city where Bin has moved hoping to reuinte with him and restart their life together. What will Qiao do to get back on her feet after losing her money to a con woman? Settle into the calm pace of this story, rarely seeming frantic even as the characters navigate the storms of their lives, pressing on across 15 years of recent history. Reading about the movie afterwards I was surprised to see many consider this to be a black comedy. (Availble at the time of writing, but as of 6/4/20, longer available to stream on Kanopy) 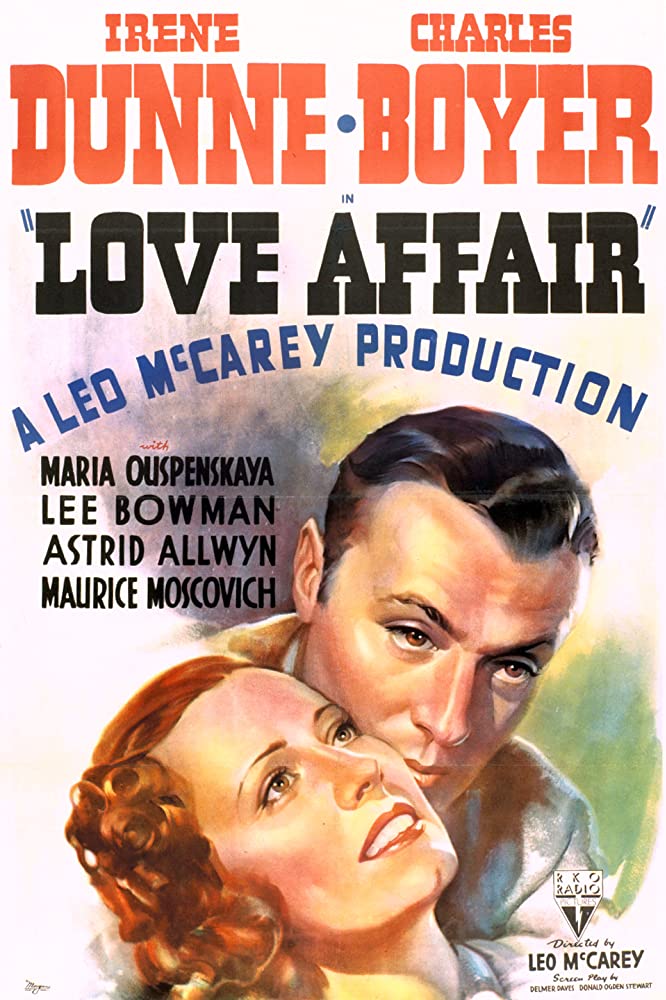 Love Affair – Resplendent Irene Dunne and irresistible Charles Boyer fall in love on a steamer headed for New York City in this 1939 epitome of Hollywood romance. Since both are engaged to other people, they promise to meet again in six months at the top of the Empire State Building but the fates intervene setting up an obstacle to their love. If the story seems familiar, you may have seen its first remake, the excellent An Affair to Remember, starring Cary Grant and Deborah Kerr, and directed by Leo McCarey, the legendary master of improvisation who also directed Love Affair less than 20 years before. I wouldn’t waste time arguing over which one is better than the other, it’s like the difference between two photographs of people celebrating the end of different wars in Times Square decades apart.  A would be comfort movie mini-marathon would be to watch both along with Norah Ephron’s Sleepless in Seattle, in which ever order you please. One could even take a chance on the pariah of the Love Affair family (All together nominated for 12 Academy Awards) and add to your playlist the 1994 remake starring Warren Beatty and Annette Benning. Maybe it’s time for this story to be remade again? Like “Stardust” ; “Let’s Do it, Let’s Fall in Love” or any standard from the Great American Songbook, subtle differences in performance and tone can yield rewarding returns across generations. Available to stream and download on hoopladigital.com 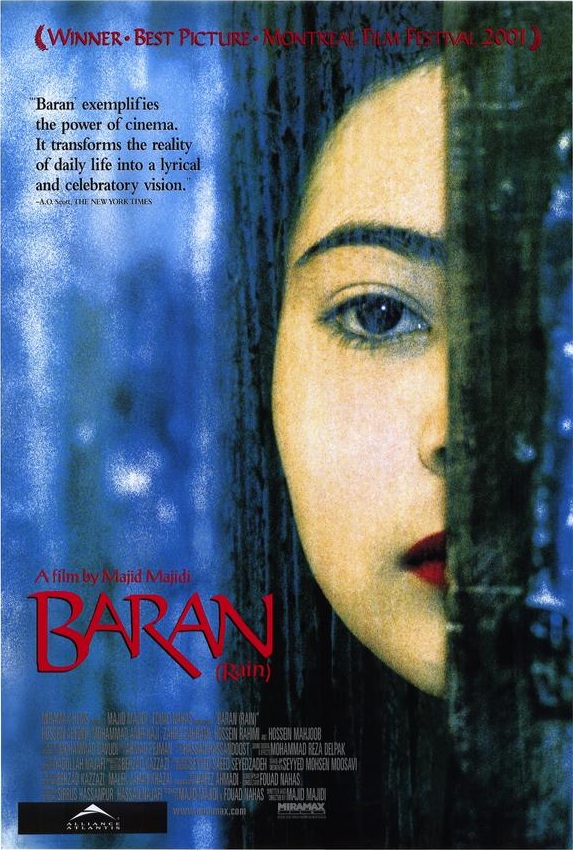 Baran – It feels as if many more than four months have passed since the death of Iranian general Qasem Soleimani seemed to bring us to the brink of another Middle Eastern war. Now we are in much the same boat as the Iranians, fighting against the common enemy of the Coronavirus which threatens the lives of every person on earth. While nearly a twenty-year-old movie, Baran is more relevant than ever. It follows construction workers in Tehran, many of whom are undocumented refugees from Afghanistan employed illegally by the foreman and working at unjustly low wages. When one of the refugees brakes his leg in a fall his child arrives to replace his lost source of income. Another young assistant on the bustling construction site feels his position threatened by this newcomer, but is surprised by a secret that profoundly alters his perspective. I hope you will be as moved by the emotional and poetic beauty of this film as I was and it may serve as a doorway into one of the richest veins of international cinema. Here is a list of more highlights from Iran: https://www.richlandlibrary.com/books-movies-music/10-films-iranian-directors Available to stream and download on hoopladigital.com 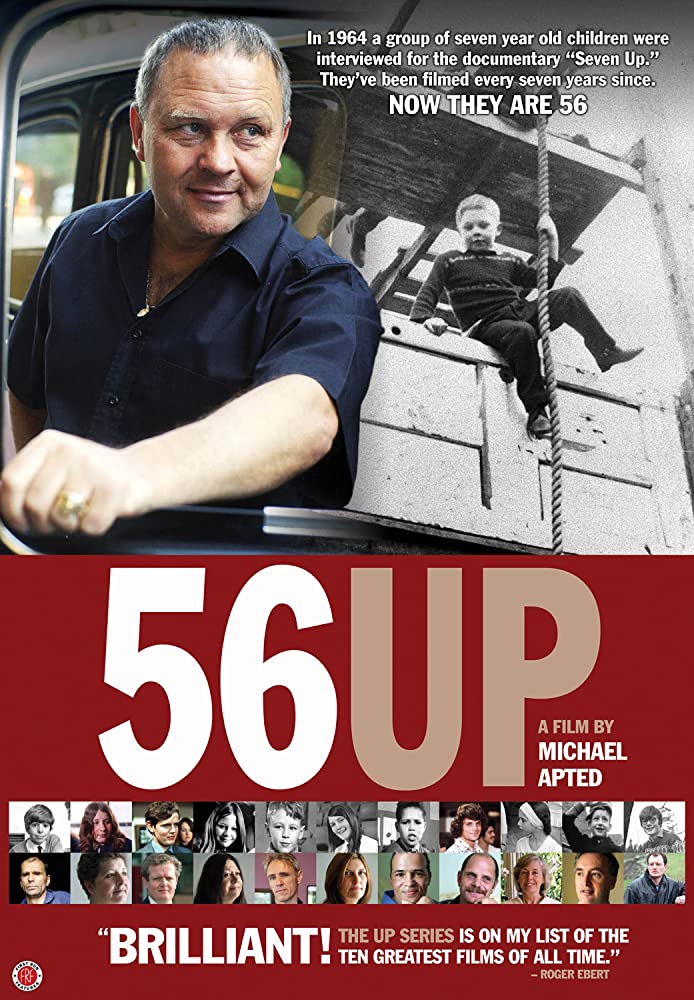 BONUS: 56 Up – In 1964 Michael Apted began filming a group of fourteen British seven-year-olds about their hopes and dreams for their lives. Every following seven years they met again to see what had changed and how close or far from the mark their visions of the future had been. Taken from a variety of classes and family backgrounds the series provides a clarifying look into the ways the courses of our lives are shaped by our social environments. As the participants grow older the series becomes ever more moving as we come to know these people who’ve grown and changed while also still remaining somehow essentially the same as persons, coping with the tragedies of life and finding ways to evolve. Life goes on. Take a chance on 56 Up and keep an eye open for the US release of 63 Up. Available to stream on both Kanopy and Hoopla.