If manga are your comics of choice, then our Hoopla and Overdrive collections have several series for you, ranging from epic samurai classics and standalone originals to fresh adaptations of shows, games, and superheroes. Age rating suggestions are included with each title, and each recommendation includes a link to its Hoopla or Overdrive page for instant checkout. Keep in mind that Overdrive titles may require placing a hold. 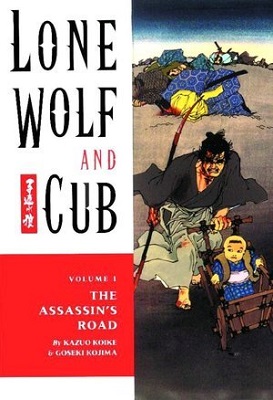 When an executioner for the shogun is falsely accused and driven from his home, he takes his three-year-old son with him to assume lives as assassins for hire. Embarking on a hard-fought journey for revenge, this father and son story never misses a beat for any of its 28 volumes. Gruesome violence and adult situations accompany this bitter tale of survival and bloody inheritance. The black and white artwork is often as stark and unforgiving as the morals imparted in each chapter. 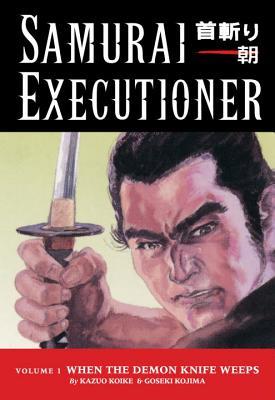 A spinoff from Lone Wolf & Cub, this series is about a character who tests blades for the shogun and performs executions. Many of the stories in this ten-volume series involve the different personalities the executioner meets, often criminals’ testimonies before they are beheaded. Koike and Kojima started this series two years into their run of Lone Wolf & Cub, bringing the same reflective violence to a different side of their Tokugawa-era epic. 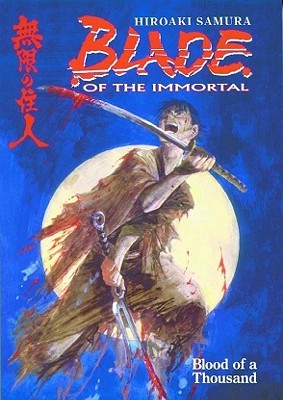 Blade of the Immortal by Hiroaki Samura (Mature)

A ronin cursed to live forever until he kills a thousand evil men meets a young woman seeking revenge on her parents’ killers. So begins Blade of the Immortal, Samura’s twenty-year magnum opus to date. This series digs into new nooks and crannies with each volume, including an expansive cast of characters, inventive swordplay using an armory’s worth of unique blades and traps, and an evolving perspective that will have readers eventually rooting for everyone on the page, even if there’s no way they all live to see the end. Samura’s detailed use of shading and choreography leads to some of the most fluid duels and striking wordless scenes known to manga. 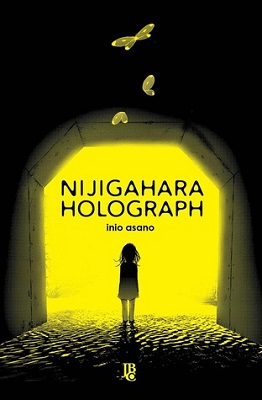 Asano’s tale of psychological horror bounces between his cast’s childhoods and adulthoods while edging closer to the traumatic events that shattered their lives. Surreal imagery, such as a reappearing cloud of glowing butterflies, hints at memories lost or denied. This is not a clear or feel-good story. It would rather walk the reader through the bruised psyches of its characters, with puzzle pieces slowly falling into place along the way. Asano’s ability to render such a bright, realistic world in some chapters only to twist it into nightmares in others makes this a manga like few others. 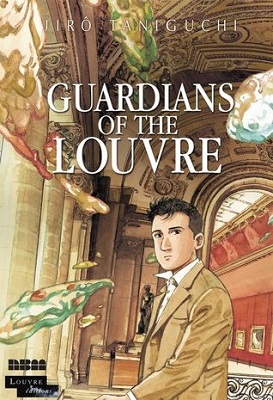 Guardians of the Louvre by Jiro Taniguchi (Teen and up)

A manga artist catches a fever after a comics convention but makes sure to visit the Louvre while in Paris. Seemingly caught in a fever dream, he is able to tour the Louvre with the ghosts of famous artists Jean-Baptiste-Camille Corot, Antonio Fontanesi, and Vincent Van Gogh. In addition to exchanging ideas with them, he learns about the connection between European and Japanese art, as well as the great effort made to save certain pieces during World War II. Taniguchi is famous for his stories that gently wander through physical spaces and exercise a meditative mindset. This is an excellent example of comics as tourism. 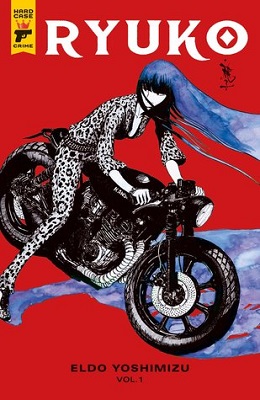 Ryuko by Eldo Yoshimizu (Teen and up)

There’s a story here involving war zones, child abduction, terrorism, and gang violence, but Yoshimizu’s artwork is the real draw. Each scene is the setup for some personal revelation from the enigmatic Ryuko’s past, but they’re also excuses to warp the page with guns blazing, motorcycles giving chase, and wild brawls. 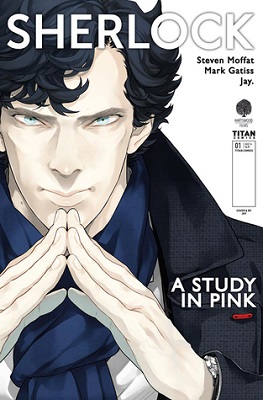 Sherlock by Steven Moffat, Mark Gatiss, Jay (Teen and up)

This series directly adapts episodes from the recent BBC series starring Benedict Cumberbatch, including A Study In Pink, The Blind Banker, The Great Game, and A Scandal in Belgravia. The clever plotting from writers Moffat and Gatiss is not lost in the transition to manga, with adapter and artist Jay also capturing Holmes’s wicked grin when he takes on a mystery and Watson’s thoughtful assistance. 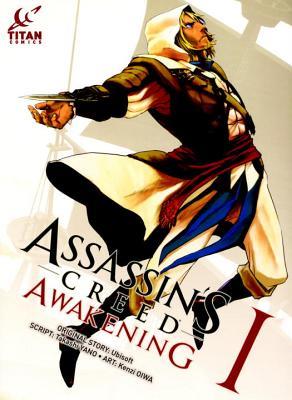 Fans of the Assassin’s Creed videogames will recognize this loose adaptation of Assassin’s Creed IV: Black Flag. Edward Kenway is a pirate in 1715 who runs across a secret conflict between a society of assassins and another of templars. They’ve been locked in an ages-long conflict that reaches all the way to the present, where a young man thinks he’s experiencing a virtual reality game through Edward’s eyes. What’s fact and fiction, past and present? Swords and conspiracies clash across history and the two volumes comprising this story. 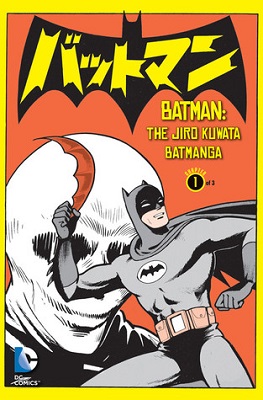 Batmanga by Jiro Kuwata (Tween and up)

Batman has gone through a lot of transformations over the decades, but even the hijinks of the Silver Age struggle to keep up with the over-the-top weirdness of Jiro Kuwata’s manga. The plot twists and villains are as zany as his art style, always surprising the reader with the unexpected. If you think you’ve seen everything in cape stories before, try this. 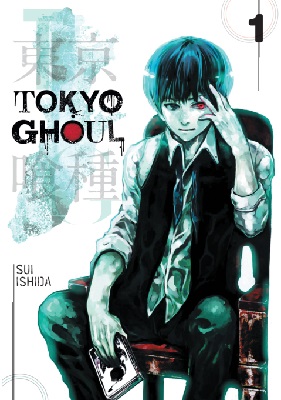 The world is infested with ghouls, creatures who feast on flesh, wield powerful weapons, and can pass for human. When Ken Kaneki is injured in a ghoul attack, he receives an organ transplant from the ghoul who attacked him. Tossed between worlds, he sorts out his new identity and hunger for flesh thanks to a cafe that caters to ghouls. Kaneki takes his first steps into a multi-faction war between humanity, ghouls trying to get by, and ghouls who are tired of sticking to the shadows. This series is at turns thoughtful, meditative, and horrifically violent. 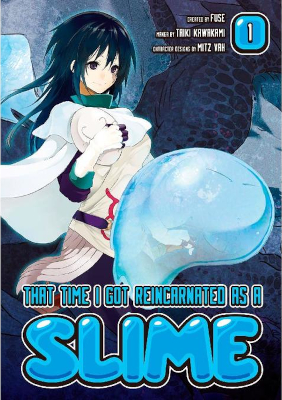 This is a textbook example of the "isekai" or "other world" genre. Here, the protagonist is middle-aged salaryman Mikami, whose sudden death results in a new life in a fantasy realm, but as a relatively harmless slime monster. However, even a slime can gain some useful powers if it's determined enough. Mikami's journey to greatness is a lot like someone crushing a role-playing game by over-leveling at the very start. What effect will his presence have on this new world, and will he be able to protect any new friends he makes? 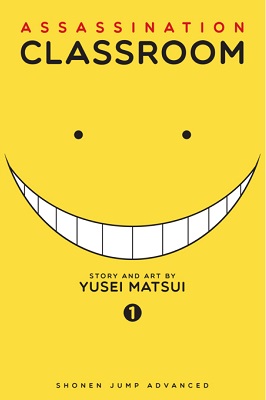 Assassination Classroom by Yusei Matsui (Teens and up)

A yellow, squid-like alien punches a hole in the moon and demands to teach a junior high classroom. The world's governments agree to this demand while setting an enormous bounty on the creature's head and equipping the students with weapons to dvtake it out. The catch: this ultra-fast creature is a caring educator and the students genuinely react to its lessons and encouragement. The setup is beyond surreal, but the large cast of characters allows for plenty of humor and heartfelt moments between comedically futile murder attempts. 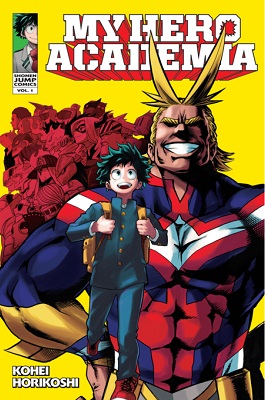 My Hero Academia by Kohei Horikoshi (Teens and up)

Superhero high school! In a world where some people are born with superpowers, young Midoriya mourns his lack of special abilities. However, a chance run-in with the legendary superhero All Might gives him a new lease on superpowered life. He will have to lean on his obsessive studying of superheroes in order to survive among classmates born with amazing powers. This enormously popular series is a universe unto itself, with tons of characters, backstories, and evolving powers that make every nook and cranny compelling. 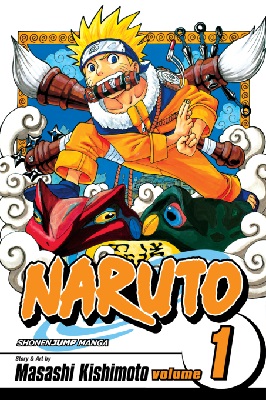 Naruto by Masashi Kishimoto (Teens and up)

Uzumaki Naruto is an orphaned outcast with dreams of becoming a great ninja. Why does his community reject him, and will he live up to his true potential? Ninja abilities such as shadow clones, elemental manipulation, and world-shaking summons mean any clash between two characters will blow up the page. As Naruto's journey to mastery continues, he progresses from ninja lessons to international intrigue to uncovering a conspiracy ages in the making. What starts as a humble manga unspools over the course of 72 volumes into a tidal wave of epic proportions and interlocking character arcs. 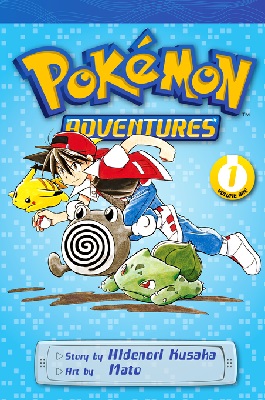 Pokemon Adventures by Hidenori Musaka and Mato (Kids and up)

The child known as Red is tasked by local pokemon (pocket monster) expert Professor Oak to collect and study as many varieties of pokemon as possible. Oak's grandson, Blue, is set on the same goal, and both of them are competing in pokemon battle competitions along the way. Green, a mischievous girl, uses pokemon to chase profit and treasure. The three of them have a lot to learn from each other while traveling the world in search of pokemon. This classic manga is a wholesome adventure full of cute creatures and a moral in each chapter. Readers will get sucked in whether or not they're fans of the Pokemon games.