The #BroaderBookshelf reading challenge aims to diversify your reading habits. There are 14 prompts each year to help you discover new authors, genres, and books you might not otherwise pick up. The #BroaderBookshelf book group meets virtually the first Wednesday of each month and tackles a different prompt of the challenge.

February was the first session of the #BroaderBookshelf book group. Members gathered via Zoom to discuss His Only Wife by Peace Adzo Medie. It is the story of Afi Tekple, a young Ghanian woman who is pressured by her family into marrying a man she does not know. The man, Elikem Ganyo, is wealthy, successful, and handsome, but does not come to their wedding as he is away on a business trip during the celebration. This is just the first of the many letdowns Afi experiences as she navigates life as a newly wed. The marriage between Afi and Eli has been arranged by their parents in attempts to sway Eli away from a woman with whom he has a child and continues a courtship.

In this novel, we get a glimpse into what life is like in modern day Ghana from the food, to the bustling markets, and even inside the fashion school that Afi attends. We see the challenges Afi faces having to share her husband with another woman, the familial pressures that are placed upon her, and the desire of independence.

The group had a rich discussion about the cultural differences detailed in the book, polygamy and its affect on a healthy marriage and mental health, societal expectations, and the power money has over people and their relationships.

​“Elikem married me in absentia; he did not come to our wedding.”

As a book group leader, something I often hear from attendees is, "I never would have picked this book up on my own, but I really liked it!". Attending a book group can give you new perspectives, alternate interpretations and can be a rewarding experience all while getting to know fellow readers in your community and gaining a sense of belonging. Looking to join a book group at your local library? Click here to see all the wonderful options. 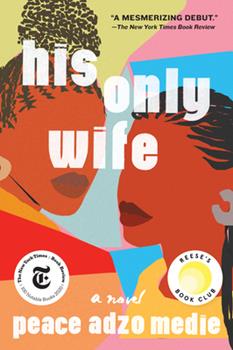 *Please note: many book groups are currently all-virtual during the pandemic. Be sure to check the event listing and register so that the Zoom link can be emailed to the address associated with your library card. Don't have a library card? Click here!

The titles chosen for the #BroaderBookshelf book group will be available on Hoopla. Join us for the March 2022 discussion of Autism in Heels: The Untold Story of a Female Life on the Spectrum by Jennifer Cook O'Toole as we cover the prompt, "Read a biography or memoir about someone who is not a celebrity".  Register here.

Take a photo of the book cover and share it on social media using #BroaderBookshelf.

Don't forget to jot each title down next to the prompt on your tracking sheet.You can check off more than one category with the same book!

Complete all 14 reading prompts and e-mail a picture of your completed tracking record to readfreely@richlandlibrary.com. We’ll send a small prize to your preferred location for curbside pick-up and enter you into a drawing for a Richland Library #BroaderBookshelf tote bag.

His Only Wife book club kit

Find staff recommendations for each of the #BroaderBookshelf2022 prompts, here or try our personalized recommendation service, here.

In Every Mirror She's Black

My Sister, the Serial Killer

The Girl with the Louding Voice

Out of Darkness, Shining Light

(being a Faithful Account of the Final Years and Earthly Days of Doctor David Livingstone and His Last Journey from the Interior to the Coast of Africa, As Narrated by His African Companions, in Three Volumes)
Gappah, Petina, 1971- author.
303 pages : illustration ; 23 cm
Find
Book

I Am a Girl from Africa

An Orchestra of Minorities

Chronicles from the Land of the Happiest People on Earth