Financial advice includes some broad ideas that apply to a lot of people. Nuggets of wisdom like “pay yourself first” or “diversify your portfolio” are time-tested and never go out of style. However, there are certain financial lessons that can backfire if their teacher, including you, is not careful. For Financial Literacy Month 2022, we are sharing financial literacy lessons that can do more harm than good if you’re not careful, as well as advice for teaching the core concept.

“Compound interest is the eighth wonder of the world. He who understands it, earns it. He who doesn't, pays it.” -Albert Einstein

There is a fable about chess and rice that helps teach the power of compounding. As the story goes, the inventor of chess showed his game to the king. The king was so impressed he let the inventor name his own reward. The inventor said, I would like to be rewarded in rice, with one grain for the first square of the chess board, two for the second, four for the third, eight for the fourth, and so on. The king, hearing these small numbers, immediately agreed. It probably wouldn’t add up to much by the end of the board, right? Maybe a couple pots’ worth of rice?

Halfway across the board (32 spaces), the rice count becomes 2,147,483,648 grains. By the end, there would be over 18 quintillion grains of rice, or roughly the entire modern world’s rice output for an entire decade.

That is the power of compounding. Keep multiplying over time and a small number becomes enormous.

The king’s mistake in that story was to focus on “the front of the board,” or when the gains were pretty small. If he did the math all the way through he would have been shocked at “the back of the board” where all the compounding really pays off. This is true for paying a chess designer in grains of rice as well as calculating the cost of a loan.

A common problem with explaining compounding today is focusing too much on the “back of the board.” Popular lessons in compounding will explain how if you pay $200 a month into a savings account earning 8% annually starting at age 18, you will be a millionaire in time for retirement in your early 60’s. The math does not lie - try a compound interest calculator for yourself. But it also leaves out a lot. 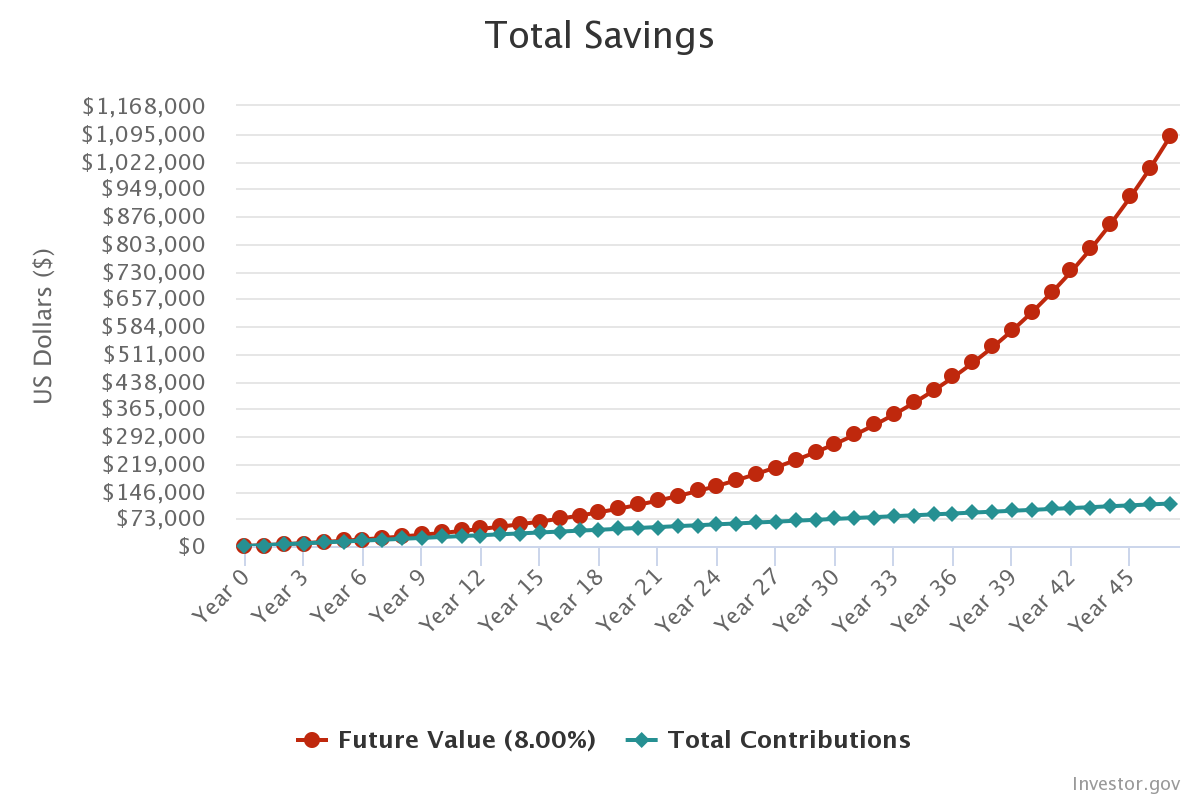 Did you have an extra $200 to spare every month when you were 18 years old? If so, then good for you, but that also happens to be the age many young people start college and/or paying rent, and financing a car. All three are more expensive than ever, far beyond what an entry-level job can cover.

Okay, so maybe the start date is pushed back a few years, but compounding still works, right? Yes, except that detail about money supposedly earning 8% per year. Why is that? Where are you supposed to invest your money to get that guaranteed rate of return? How does someone actually get started with the details of this stuff instead of talking about rice and how easy it is for broke teenagers to become millionaires? At 8% compounding, the inventor of chess was paid 127 grains on the final square, not 18 quintillion. (That’s still a massive gain, though!)

An index fund tracking the S&P 500* has historically returned over 8% annually when measured over decades. There is a saying that the best investors are either dead or forgot they invested. In other words, people who don’t fiddle with their accounts almost always outperform people who do.

If you want to teach compounding, make sure to use the “front” and “back” of the board together. Have a goal in sight for saving and investing, but also focus on what can be done now. Don’t skip from age 18 to 65 without explaining how to open a brokerage account** or choose a mutual fund*** or determine whether a financial advisor is trustworthy****.

*The S&P 500, which represents a few more than 500 of the largest tradeable American companies, represents about 85% of the value of the entire US stock market. When financial media refers to “the market” returning a certain percentage, that usually means the S&P 500.

**There are popular apps and websites for investing in just about anything, but time-tested banks and institutions are still useful. Your mileage may vary.

****A good sign is the word “fiduciary,” which means the advisor must act in your interests before their own. Investopedia goes in-depth on choosing a financial advisor or planner here.

Thomas M. is a Certified Financial Education Instructor (CFEI) and has previously blogged about Talking To Kids About Money as well as Which Money Animal Are You?. The previous blog post in this series can be found here.