I’m With the Banned is a series that aims to promote books that have been recently challenged as unsuitable for young readers, giving parents and readers a deeper understanding of the themes involved. Cemetery Boys is Aidan Thomas’s debut novel.

Yadriel Vélez Flores is a brujx, a magic-user whose family had been blessed thousands of years ago by Mictēcacihuātl (pronounced, “MIK-teh-kah-see-WAT"), the Mayan goddess of death (aka Lady Death, Santa Muerte). Male brujx (brujos), have the power to summon spirits and cut the tether that ties them to personal objects.) Female brujx (brujas) have the power to heal wounds. Both use animal blood to activate their portajes (magical items that channel their powers, daggers for brujos and pendants for brujas).

Yadriel desperately wants to prove to his family he is a brujo, but the only ones who see him as a boy are his cousin, Maritza, his Tío Catriz, and his recently deceased mother, Camila. He and Maritza perform the initiation ceremony, dedicating Yadriel to Lady Death. When he tries to summon the spirit of their cousin, he instead gets Julian Diaz, the school bad boy. They go on a quest to earn Yadriel’s place in brujx society and Julian’s peaceful rest.

Thomas lets the relationships between the characters develop naturally. Yadriel is initially guarded and defensive with Julian, but we see the process of their bond forming. I feel like Aidan’s primary purpose was to provide a chance for trans and non-binary youths to see their daily lives mirrored in literature, but it was educating for an outside view. There is nothing like personal experience to foster understanding, and fiction, especially youth fiction, allows writers to lead readers through what it is like to be someone else.

According to Adri of perpetualpages (whose excellent reviews of this book have informed this one), the SoCal landscape is spot-on and the representation of Latinx family life and trans youth struggle read as authentic. The brujx live in a multi-generational household haunted by traditional machismo. The family is tolerant of Yadriel’s identity, but it’s clear the people barely have the context to understand him. Yadriel cringes every time he’s the center of attention, his bodily agony can be felt through the pages whenever someone glances at his chest or struggles with his name. The real-world anxieties and fantasy dangers flow together to make this book an engrossing read and keep you guessing until the very end.

Julian provides a great contrast to Yadriel, who realizes the comforts of family life have insulated himself from the struggles experienced by many LGBTQ+ youth, struggles such as parental rejection, intersecting struggles of poverty, immigrant precarity and homelessness. Through Julian, whose wild energy and “bad boy” rumors make Yadriel initially write him off as a problem to be solved rather than a human to be loved, Yadriel comes to a deeper understanding of the struggles of others, and indeed his own. The reader is led through the multi-faceted community of LGBTQ+ family dynamics and social struggle which proves to be bumpy, but ultimately a positive experience.

The Death worship puts a perspective on life that runs counter to traditional understanding. People are socialized to fear the end of life, and Death becomes a kind of evil to be fought and avoided. The way people deal with this fear says a lot about them, not only in Cemetery Boys, but in real life. Those who accept Death as a shepherd ushering us to peace learn to live in ways that minimize conflict and try to help people in need. Those who fear the end do anything they can to avoid it, which often means struggling to dominate others, as though they can be sent to death in one’s place. The brujx, by healing and releasing spirits to their peace, accept death as a part of life. Santa Muerte is not an avenging angel, but a shepherd, a comforting hand to take you to your rest.

I thoroughly enjoyed and highly recommend this book.

This book is written for teens and is recommended for 13-18-year-old readers on Amazon. Given the higher age range, the traditionally “unsuitable” material (drinking, drugs, profanity, sex, violence) are easy to digest. The boys attend a party where there is alcohol (Yadriel does not drink, and Julian’s a ghost, so nothing is consumed in the text). Some people may be uneasy with the idea of worshiping the personification of Death, and the blood magic is not so graphic as to merit being removed.

The unavoidable conclusion is this was challenged because it features a homosexual trans boy and a gay boy, and they share a ghost-kiss. I suppose in a way I must thank those who challenged this book. If they had not, I never would have read a teen romance, and I am glad I read this one.

Readers with sensitivities to the following may want to prepare themselves for:

- Gender dysphoria, misgendering and deadnaming (the name is never revealed)

- A few scenes of ritualized self-harm

- Discussions of transphobia and parental rejection

- Blood, both animal and human (no animals are harmed in the text) 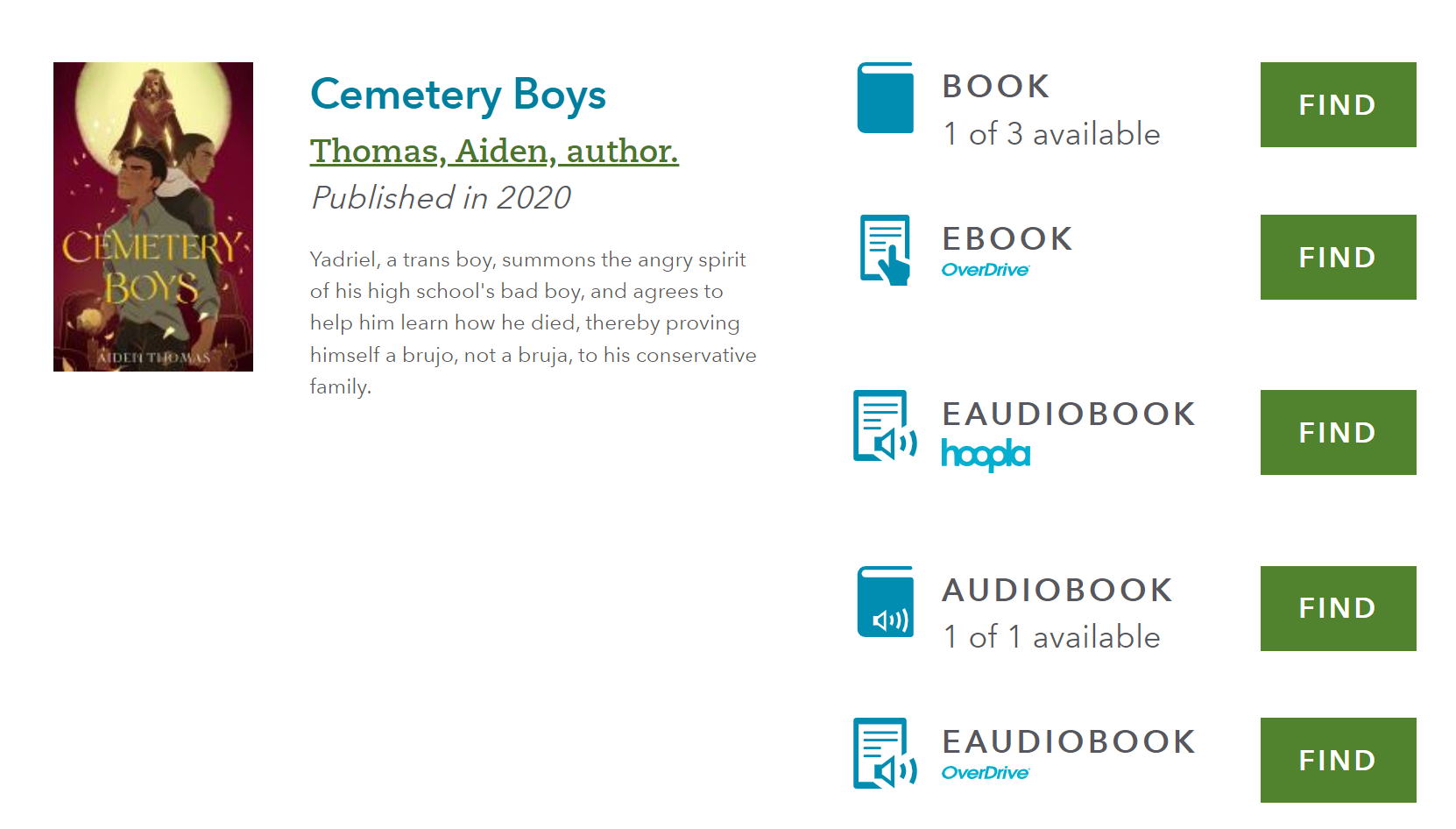 Richland Library is dedicated to intellectual freedom. To read more Richland Library blogs about banned books, how you can help stop book bans, and the impact of banning LGBTQ+ materials, please click on those respective links.