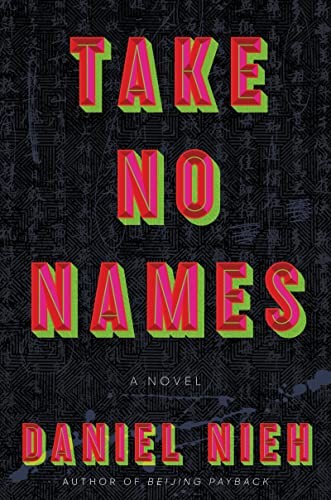 Daniel Nieh's Take No Names (publication date July 5, 2022) is a follow up to his novel Beijing Payback but works beautifully as a standalone. This riveting, action-packed thrilling crime novel follows Victor Li, a man hiding from his past, who finds himself scavenging storage containers holding the belongings of the recently deported. He and his crony, Mark, find a painite- the world's rarest gem, along with a journal of encrypted clues that leads to a buyer in Mexico City. A rocky journey across the border only leads to more trouble for the two as they get wrapped up in international espionage and entrenched in a Chinese money laundering scheme on a massive scale.

“[Take No Names] combines biting humor, breathless action scenes, a clever presentation of mixed languages, and dark geopolitical commentary, including an indictment of America's own duplicity. It’s a lot of fun. A cutting thriller with nonstop action and twisty consequences.”- Kirkus Reviews

Nieh leads the reader down the dark, complex, and outright brutal underbelly of Mexico City’s international organized crime network braiding factual elements into the narrative. I definitely had to do some research about the Chinese government looking at Mexico as a viable labor and land opportunity for expanding industries. The wave of Chinese investments in Mexican land and labor began in the early 2000s. Since 2005 China has invested more than $3 billion in Mexico.

In the novel, Victor is Chinese-American and multilingual, speaking Chinese, English and Spanish. Because of his linguistic skills he is capable of deciphering some of the “code” that was left behind by the previous owner of the gem, Song Fei. Part of what made this book so intriguing was the fact that the reader is absorbed into the mind of the main character, can see his thought process as he attempts to solve the puzzles, and at the same time is shown his somewhat softer side. Nieh’s characters are multilayered and the reader is often shown the deeper complexities of human emotion without being excessive.

“As I lost myself in the excavation of other people’s tragedies, an unfamiliar feeling washed over me. I had trouble naming it at first. Too warm for pity. Too far removed for compassion. Eventually I made up a word for it: “intonymity”. The combination of intimacy and anonymity.”

Short chapters, quick-witted commentary, a bit of humor and an intelligently crafted plot make this a perfect summer read to throw in the beach bag, or read creek-side at a mountain cabin. Interested in this title? Want more like it (or something completely different?), get your personalized recommendations here.