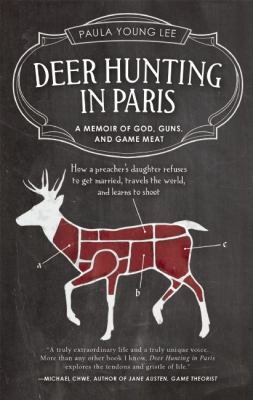 A Memoir of God, Guns, and Game Meat

Lee, Paula Young, author.
Format: Ebook
Description: 1 online resource
What happens when a Korean-American preacher's kid refuses to get married, travels the world, and quits being vegetarian? She meets her polar opposite on an online dating site while sitting at a caf ̌in Paris, France and ends up in Paris, Maine, learning how to hunt. A memoir and a cookbook with recipes that skewer human foibles and celebrates DIY food culture, Deer Hunting in Paris is an unexpectedly funny exploration of a vanishing way of life in a complex cosmopolitan world. Sneezing madly from hay fever, Lee recovers her roots in rural Maine by running after a headless chicken, learning how to sight in a rifle, shooting skeet, and butchering animals. Along the way, she figures out how to keep her boyfriend's conservative Republican family from "mistaking" her for a deer and shooting her at the clothesline.
Other Authors:
hoopla digital.
Subjects:
Hunting -- Maine -- Anecdotes.
Korean American women.
Children of clergy.
Electronic books.