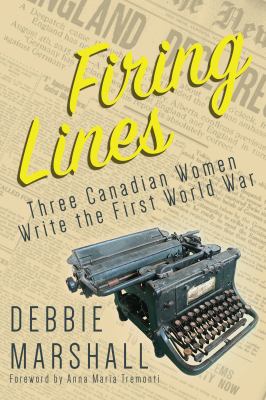 Marshall, Debbie, 1959- author.
Format: Ebook
Description: 1 online resource
Read between the front lines: The stories of three Canadian female journalists stationed in England and France during the First World War. Europe: 1914-18. Beatrice Nasmyth, a writer for the Vancouver Province, covered the war's impact on women, from the munitions factories to the kitchens of London's tenements. Mary MacLeod Moore, a writer for Saturday Night Magazine, managed the successful wartime political campaign of Canadian Roberta MacAdams and attended the Versailles Peace Conference as Premier Arthur Sifton's press secretary. Elizabeth Montizambert was in France during the war and witnessed the suffering of its people first-hand. She was often near the fighting, serving as a canteen worker and writing about her experiences for the Montreal Gazette. The reportage from these three women presents an insightful, moving, funny, and compelling body of observations of a devastating conflict, from underrepresented points of view. Firing Lines is based on the letters, articles, and books they wrote, as well as the records of those who knew them. The book offers a fresh perspective on a war that touched nearly every Canadian family and changed our sense of ourselves as a nation.
Other Authors:
hoopla digital.
Subjects:
Moore, Mary MacLeod, 1871-1960.
Nasmyth, Beatrice, 1885-1977.
Montizambert, Elizabeth, 1875-1964.
Women war correspondents -- Canada -- Biography.
World War, 1914-1918 -- Journalists -- Biography.
World War, 1914-1918 -- Press coverage -- Canada.
Electronic books.