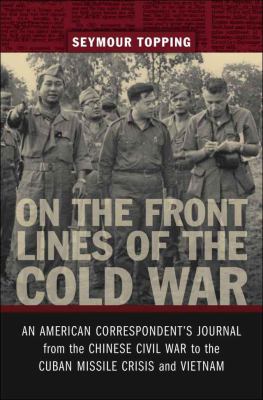 Topping, Seymour, 1921-
Format: Ebook
Description: 1 online resource.
In the years following World War II, the United States suffered its most severe military and diplomatic reverses in Asia while Mao Zedong laid the foundation for the emergence of China as a major economic and military world power. As a correspondent for the International News Service, the Associated Press, and later for the New York Times, Seymour Topping documented on the ground the tumultuous events during the Chinese Civil War, the French Indochina War, and the American retreat from Vietnam, Cambodia, and Laos. In this riveting narrative, Topping chronicles his extraordinary experiences covering the East-West struggle in Asia and Eastern Europe from 1946 into the 1980s, taking us beyond conventional historical accounts to provide a fresh, first-hand perspective on American triumphs and defeats during the Cold War era. At the close of World War II, Topping -- who had served as an infantry officer in the Pacific -- reported for the International News Service from Beijing and Mao's Yenan stronghold before joining the Associated Press in Nanking, Chiang Kai-shek's capital. He covered the Chinese Civil War for the next three years, often interviewing Nationalist and Communist commanders in combat zones. Crossing Nationalist lines, Topping was captured by Communist guerrillas and tramped for days over battlefields to reach the People's Liberation Army as it advanced on Nanking. The sole correspondent on the battlefield during the decisive Battle of the Huai-Hai, which sealed Mao's victory, Topping later scored a world-wide exclusive as the first journalist to report the fall of the capital. In 1950, Topping opened the Associated Press bureau in Saigon, becoming the first American correspondent in Vietnam. In 1951, John F. Kennedy, then a young congressman on a fact-finding visit to Saigon, sought out Topping for a briefing. Assignments in London and West Berlin followed, then Moscow and Hong Kong for the New York Times. During those years, Topping reported on the Chinese intervention in the Korean conflict, Mao's Cultural Revolution and its preceding internal power struggle, the Chinese leader's monumental ideological split with Nikita Khrushchev, the French Indochina War, America's Vietnam War, and the genocides in Cambodia and Indonesia. He stood in the Kremlin with a vodka-tilting Khrushchev on the night the Cuban missile crisis ended and interviewed Fidel Castro in Havana on its aftermath. Throughout this captivating chronicle, Topping also relates the story of his marriage to Audrey Ronning, a world-renowned photojournalist and writer and daughter of the Canadian ambassador to China. As the couple traveled from post to post reporting on some of the biggest stories of the century in Asia and Eastern Europe, they raised five daughters. In an epilogue, Topping cites lessons to be learned from the Asia wars which could serve as useful guides for American policymakers in dealing with present-day conflicts in Afghanistan and Iraq. From China to Indochina, Burma to Korea and beyond, Topping did more than report the news; he became involved in international diplomacy, enabling him to gain extraordinary insights. In On the Front Lines of the Cold War, Topping shares these insights, providing an invaluable eyewitness account of some of the pivotal moments in modern history.
Series: From our own correspondent.
Other Authors:
hoopla digital.
Subjects:
Topping, Seymour, 1921- -- Travel.
Topping, Seymour, 1921- -- Diaries.
Military history -- 20th century -- Anecdotes.
Cold War -- Anecdotes.
War correspondents -- United States -- Diaries.
Electronic books.