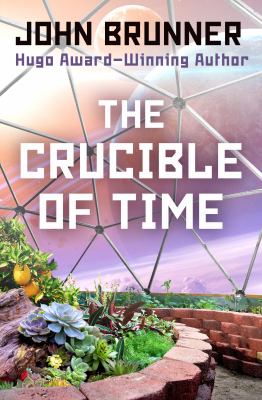 Brunner, John, 1934-1995.
Format: Ebook
Description: 1 online resource
In The Crucible of Time, John Brunner creates a true epic of SF invention. Imagine a planet existing in a debris-strewn corner of the galaxy. Cosmic dust and rubble cause an endless succession of ice ages followed by tropical warmth followed by more ice ages, and on and on. Meteors of all sizes plummet to the surface of the planet frequently and burgeoning civilizations have a sad tendency to be wiped out all of a sudden. Society survives, sort of, but the brightest scientists know that to survive long term, the race has to transcend the surface of the planet and become a space-faring species. In a story that spans millennia, a determined group of people take control of their own evolution and build the technological society that will be their way into space. Long before Brian Aldiss's magisterial Helliconia series, even before some of Arthur C. Clarke's grand future visions, John Brunner led the way in imagination and scope of vision. For each generation, there is a writer meant to bend the rules of what we know. Hugo Award winner (Best Novel, Stand on Zanzibar) and British science fiction master John Brunner remains one of the most influential and respected authors of all time, and now many of his classic works are being reintroduced. For readers familiar with his vision, this is a chance to reexamine his thoughtful worlds and words, while for new readers, Brunner's work proves itself the very definition of timeless.
Other Authors:
hoopla digital.
Subjects:
Regression (Civilization) -- Fiction.
Interplanetary voyages -- Fiction.
Science fiction, English.
Electronic books.