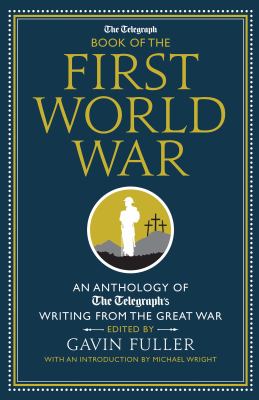 An Anthology of the Telegraph's Writing from the Great War.

Format: Ebook
Description: 1 online resource
One hundred years on, the First World War has not lost its power to clutch at the heart. But how much do we really know about the war that would shape the 20th Century? And, all the more poignantly, how much did people know at the time? Today, someone fires a shot on the other side of the world and we read about it online a few seconds later. In 1914, with storm clouds gathering over Europe, wireless telephony was in its infancy. So newspapers such as the Daily Telegraph were, for the British public, their only access to official news about the progress of the war. These reports, many of them eye-witness dispatches, written by correspondents of the Daily Telegraph, bring the First World War to life in an intriguing new way. At times, the effect is terrifying, as accounts of the Somme, Flanders and Gallipoli depict brave and glorious victories, and the distinction between truth and propaganda becomes alarmingly blurred. Some exude a sense of dramatic irony that is almost excruciating, as one catches glimpses of how little the ordinary British people were told during the war of the havoc that was being wrought in their name. Poignant, passionate and shot-through with moments of bleak humor, The Telegraph Book of the First World War is a full account of the war by some of the country's most brilliant and colorful correspondents, whose reportage shaped the way that the war would be understood for generations to come.
Other Authors:
Fuller, Gavin, editor.
Wright, Michael, 1966- writer of introduction.
hoopla digital.

The Telegraph book of the First World War : an anthology of the Telegraph's writing from the Great War.