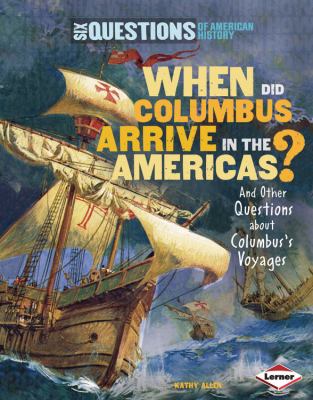 And Other Questions About Columbus's Voyages

Allen, Kathy.
Format: Ebook
Description: 1 online resource
In the late 1400s, Christopher Columbus was sure he could find a trade route from Spain to the Far East by sailing west across the Atlantic Ocean. On his first voyage, he landed on an island in the Caribbean Sea. He soon realizedn that this was not Asia and returned to Spain for more supplies. Even after three more attempts, Columbus never found a westward route to Asia. But his discoveries forever changed European views of the world and led to settlement in the Americas. So why did Columbus want a route to the Far East? How did he get his idea to sail west? What challenges did he and his crew face? Discover the facts about Columbus's voyages and how they changed the world.
Series: Six questions of American history.
Other Authors:
hoopla digital.
Subjects:
Columbus, Christopher -- Juvenile literature.
Electronic books.
America -- Discovery and exploration -- Juvenile literature.