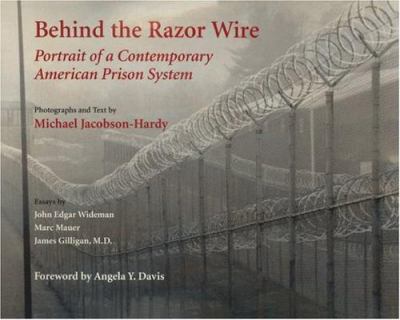 More than one million Americans live in federal and state prisons and close to another half million are in local jails. One out of every three young black men is involved in the criminal justice system. To house our ever increasing prison population, the construction of new prisons has become a growth industry in many local and state economies. Yet while prisons are a rapidly expanding feature of America's cultural and political landscape, the people in them, as well as the buildings themselves, remain hidden from public consciousness. Determined to break this silence, Michael Jacobson-Hardy entered the prison system to record the voices and the lives of the people who live and work within its walls.

Behind the Razor Wire continues the tradition of documentary photography by reporting in words and photographs on the conditions in the American prison system. Jacobson-Hardy examines the physical and psychological environments of a range of contemporary correctional institutions and the lives they contain. The foreword by Angela Y. Davis and essays by John Edgar Wideman, Marc Mauer, and James Gilligan, MD make a searing indictment of America's criminal justice system, while offering a framework for understanding the photographs in their historical and cultural context. By recording the faces, the emotions, and the lives of those who live and work in the prison system, Jacobson-Hardy heightens public awareness and promotes dialogue on criminal justice policy.

Behind the Razor Wire creates a visual portrait of prisons and prisoners, and a compelling documentary of how prisoners see themselves and of how in turn they are seen by others.