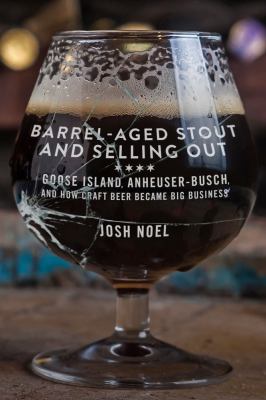 Noel, Josh, author.
Format: Book
Edition: First edition.
Description: xii, 386 pages, 8 unnumbered pages of plates : black and white illustrations ; 23 cm
Goose Island opened as a family-owned Chicago brewpub in the late 1980s, and became one of the most inventive breweries in the world. On March 28, 2011, the Halls sold the brewery to Anheuser-Busch InBev, maker of Budweiser, the least craft-like beer imaginable. The sale forced the industry to reckon with craft beer's mainstream appeal and a popularity few envisioned. Noel examines the backlash from Chicagoans and beer fanatics across the country as the discussion escalated into an intellectual craft beer war. Here he addresses the question: how should a brewery grow?
Contents: Part I: Barrel-Aged Stout; 1. A Brewery Was the Answer; 2. "They Serve You a Budweiser, You Take One Sip and Spit It Out and Say, 'Oh My God, I'm Drinking Water'"; 3."In Chicago There Are Now No Fewer than Six Breweries, of Which My Favourite Is Goose Island"; 4. The Fucking With Was On; 5. "It Started in Chicago as a Brewer Planted an Imaginative Seed in a Garden of Fertile Artists Aching for More Depth of Expression"; 6. St. Louis, We Have a Problem; 7. St. Louis, We Still Have a Problem, 8. "We Have to Look Like We Have Been Here Before"9. "They Are One of the Greatest Companies in the World, but Damn-They're Bullies"; 10. Shrinking but Free; 11. "They're Ready to Take It to the Next Level"; 12. ITS4U; 13. "They Are the King of Beers"; 14. "If You Tell Me I'm-a Pay Forty-Five Dollars for a Beer, I'm-a Tell You Kiss My Beep and to Get Beep Out of My Face Before I Beat Beep"; 15. "We Have to Do Something, and We've Looked at All the Possibilities"; Part II: Selling Out; 16. "No Matter What Happens Monday, We'll Still Clean the Kettle"; 17. "Not Fuck It Up," 18. "It Doesn't Count as a Sell Out Until You Hit 40 Million"19. "I'm Never Going to Buy It Now, Because I Don't Consider It a Craft Brewery"; 20. "People Are Looking for Us to Fuck It Up"; 21. "Trust Us a Little Bit"; 22. St. Louis-and Belgium and Brazil- We Have a Problem; 23. "Anheuser-Busch Is Letting Us Do Our Own Thing"; 24. "A Betrayal of the Spirit in Which We Started the Company"; 25. "I Was the Creative Hall-the Ambitious Hall"; 26. "We Are Very Happy with Our Future as a Family Owned Company and Not Looking at Any Partnerships"; 27. Corporate Beer Still Sucks, 28. "If People Do the Work to Find Out That We Own These Craft Brands, God Bless 'Em"29. "Buttery, Tart End, Undeniably Infected. Sad."; 30. "You Sold Out to Big Beer-Again."
Subjects:
Goose Island Brewery.
Anheuser-Busch, Inc.
Beer industry -- United States.
Microbreweries -- United States.