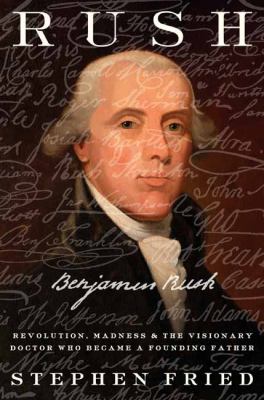 Revolution, Madness, and the Visionary Doctor Who Became a Founding Father

Fried, Stephen, 1958- author.
Format: Book
Edition: First edition.
Description: 597 pages : illustrations ; 25 cm
In the summer of 1776, fifty-six men put their quills to a dangerous document they called the Declaration of Independence. Among them was a thirty-year-old doctor named Benjamin Rush. One of the youngest signatories, he was also, among stiff competition, one of the most visionary--and he was just getting started.

Rush's true brilliance was as a physician and scientist, and he is still known as the "American Hippocrates" for pioneering a national healthcare system and revolutionizing our treatment of mental illness and addiction. Yet his provocative medicine was only part of his legacy. Over his lifetime, Dr. Rush was both a progressive thorn in the side of the American political establishment--a vocal opponent of the American slave trade and capital punishment--and close friends with its most prominent leaders. He was the protege of Franklin, the editor of Common Sense , Washington's surgeon general, and the broker of peace between Adams and Jefferson, yet his stubborn convictions more than once threatened his entire career, and his place in the narrative of America's founding.

Hold
Book
1 of 1 available
Save to List
Includes bibliographical references (pages 560-573) and index.