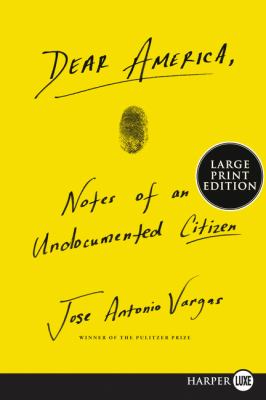 Notes of an Undocumented Citizen

Vargas, Jose Antonio, author.
Format: Large Print
Edition: First Harperluxe edition.
Description: 287 pages (large print) ; 23 cm
"The movement of people--what Americans call 'immigration' and the rest of the world calls 'migration'--is among the defining issues of our time. Technology and information crosses countries and continents at blistering speed. Corporations thrive on being multinational and polyglot. Yet the world's estimated 244 million total migrant population, particularly those deemed 'illegal' by countries and societies, are locked in a chaotic and circular debate about borders and documents, assimilation and identity. An issue about movement seems immovable: politically, culturally and personally. Dear America: Notes Of An Undocumented Citizen is an urgent, provocative and deeply personal account from Jose Antonio Vargas, a Pulitzer Prize-winning journalist who happens to be the most well-known undocumented immigrant in the United States. Born in the Philippines and brought to the U.S. illegally as a 12-year-old, Vargas hid in plain-sight for years, writing for some of the most prestigious news organizations in the country (The Washington Post, The New Yorker) while lying about where he came from and how he got here. After publicly admitting his undocumented status--risking his career and personal safety--Vargas has challenged the definition of what it means to be an American, and has advocated for the human rights of immigrants and migrants during the largest global movement of people in modern history. Both a letter to America and a window into Vargas's America, this book is a transformative argument about migration and citizenship, and an intimate, searing exploration on what it means to be home when the country you call your home doesn't consider you one of its own"-- Provided by publisher.
Contents: Gamblers -- The wrong country -- Crittenden Middle School -- Not black, not white -- Filipinos -- Mexican Jose and Filipino Jose -- Fake -- Coming out -- Playing a role -- Mountain View High School -- An adopted family -- Breaking the law -- The master narrative -- Ambition -- White people -- The Washington Post -- Strangers -- Bylines -- Campaign 2008 -- Purgatory -- Thirty -- Facing myself -- Lawyers -- Second coming out -- Outlaw -- Who am I? -- Inside Fox News -- Public person, private self -- Progress -- My government, myself -- Home -- Distant intimacy -- Leaving -- Staying -- Detained -- The machine -- National security threat -- Alone -- Interview -- Cycle of loss -- Truth.
Subjects:
Vargas, Jose Antonio.
Noncitizens -- United States -- Biography.
Journalists -- United States -- Biography.
Filipino Americans -- Biography.
Motion picture producers and directors -- United States -- Biography.
Large type books. 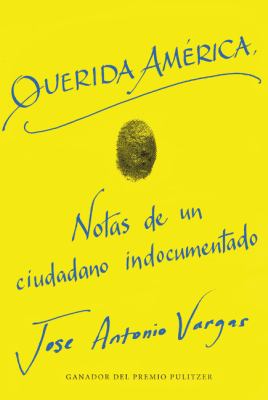 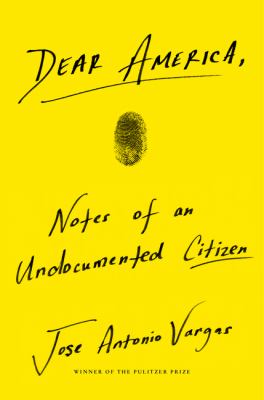