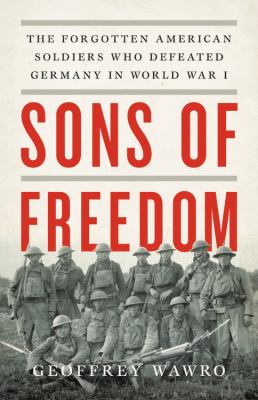 The Forgotten American Soldiers Who Defeated Germany in World War I

Wawro, Geoffrey, author.
Format: Book
Edition: First edition.
Description: xxix, 596 pages : illustrations ; 25 cm
"The heroic American contribution to World War I is one of the great stories of the twentieth century, and yet is largely overlooked by history. In Sons of Freedom, historian Geoffrey Wawro presents the dramatic narrative of the courageous American troops who took up arms in a conflict 4,000 miles across the Atlantic, and in doing so ensured the Allies' victory. Historians have long dismissed the American war effort as too little too late: a delayed U.S. Army - although rich in manpower and mat©♭riel - fought a dismal, halting battle that was certainly not decisive nor even really necessary. Historians generally assign credit for the Allied victory to improved British and French tactics, the British blockade, and German exhaustion. But drawing on extensive research in US, British, French, German, and Austrian archives, Wawro contends that the Allies simply would not have won the war without the help of the Americans. The Doughboys reversed the German advantage in troop numbers after Russia's exit from the war and, despite early missteps, prepared a series of excellent offensives. The French, by 1918, had lost their edge and needed American aggressiveness, and willingness to take casualties, to move the lines forward. As Wawro argues, it was the Americans' relentless pressure on the front that drove the war to its end. Fundamentally revising the history of the First World War and its tense final year, Sons of Freedom also reveals why the vital American contribution was so quickly forgotten. In this magisterial account, Wawro reveals the vital U.S. contribution to World War I, finally giving voice to the Doughboys, the war's 'silent slain'-- Provided by publisher.
Contents: Dog days -- "Too proud to fight" -- Sleeping sword of war -- "Lafayette, we are here" -- The Kaiser's battle -- "With our backs to the wall" -- Belleau Wood -- Chateau-Thierry -- Second Marne -- The hundred days -- Saint-Mihiel -- Meuse-Argonne : Montfaucon -- Meuse-Argonne : Exermont -- Meuse-Argonne : Romagne -- Meuse-Argonne : Barricourt -- Meuse-Argonne : Sedan -- Peace?
Subjects:
World War, 1914-1918 -- United States.
World War, 1914-1918 -- Campaigns -- Western Front.
Soldiers -- United States -- History -- 20th century.
United States -- Armed Forces -- History -- 20th century.

A mad catastrophe : the outbreak of World War I and the collapse of the Habsburg Empire
Wawro, Geoffrey, author.