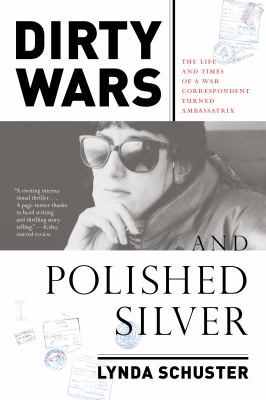 The Life and Times of a War Correspondent Turned Ambassatrix

Schuster, Lynda, author.
Format: Book
Description: xxii, 326 pages : illustrations ; 24 cm
"From a former Wall Street Journal foreign correspondent, an exuberant memoir of life, love, and transformation on the frontlines of conflicts around the world. Growing up in 1970s Detroit, Lynda Schuster felt certain life was happening elsewhere. And as soon as she graduated from high school, she set out to find it. Dirty Wars and Polished Silver is Schuster's story of her life abroad as a foreign correspondent in war-torn countries, and, later, as the wife of a U.S. Ambassador. It chronicles her time working on a kibbutz in Israel, reporting on uprisings in Central America and a financial crisis in Mexico, dodging rocket fire in Lebanon, and grieving the loss of her first husband, a fellow reporter, who was killed only ten months after their wedding. But even after her second marriage, to a U.S. diplomat, all the black-tie parties and personal staff and genteel "Ambassatrix School" grooming in the world could not protect her from the violence of war. Equal parts gripping and charming, Dirty Wars and Polished Silver is a story about one woman's quest for self-discovery--only to find herself, unexpectedly, more or less back where she started: wiser, saner, more resolved. And with all her limbs intact"-- Provided by publisher.
Contents: Prologue: Israel, 1973 -- Detroit, 1966 -- Central America, 1981 -- Central America, 1982 -- Mexico, 1983 -- The Middle East, 1984 -- South America, 1985 -- Southern Africa, 1986 -- Liberia, 1989 -- Washington, 1992 -- Mozambique, 1994 -- Peru, 1996 -- Peru, 1998 -- Epilogue: Pittsburgh, 2014.
Subjects:
Schuster, Lynda.
War correspondents -- Biography.
Women war correspondents -- Biography.
Foreign correspondents -- United States -- Biography.