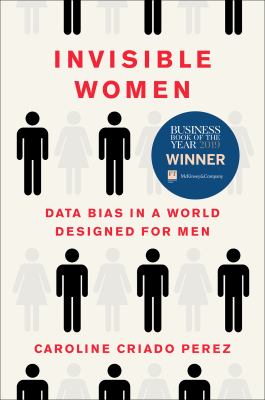 Data Bias in a World Designed for Men

Criado-Perez, Caroline, author.
Format: Book
Description: xv, 411 pages ; 24 cm
"Data is fundamental to the modern world. From economic development, to healthcare, to education and public policy, we rely on numbers to allocate resources and make crucial decisions. But because so much data fails to take into account gender, because it treats men as the default and women as atypical, bias and discrimination are baked into our systems. And women pay tremendous costs for this bias, in time, money, and often with their lives. Celebrated feminist advocate Caroline Criado Perez investigates the shocking root cause of gender inequality and research in Invisible Women, diving into women's lives at home, the workplace, the public square, the doctor's office, and more. Built on hundreds of studies in the US, the UK, and around the world, and written with energy, wit, and sparkling intelligence, this is a groundbreaking, unforgettable exposé that will change the way you look at the world."--provided by publisher.
Contents: part I. Daily life: Can snow-clearing be sexist? ; Gender neutral with urinals -- part II. The workplace: The long Friday ; The myth of meritocracy ; The Henry Higgins effect ; Being worth less than a shoe -- part III. Design: The plough hypothesis ; One-size-fits-men ; A sea of dudes -- part IV. Going to the doctor: The drugs don't work ; Yentyl syndrome -- part V. Public life: A costless resource to exploit ; From purse to wallet ; Women's rights are human rights -- part VI. When it goes wrong: Who will rebuild? ; It's not the disaster that kills you.
Subjects:
Sex discrimination against women.
Male domination (Social structure)
Social sciences -- Research.
Sex role -- Research -- Methodology.