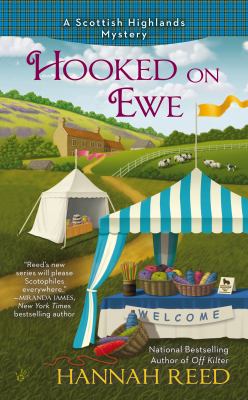 It's early September in Glenkillen, Scotland, when American expat (and budding romance novelist) Eden Elliott is recruited by the local inspector to act as a special constable. Fortunately it's in name only, since not much happens in Glenkillen.

For now Eden has her hands full with other things: preparing for the sheepdog trial on the MacBride farm--a fundraiser for the local hospice--and helping her friend Vicki with her first yarn club skein-of-the-month deliveries. Everything seems to be coming together--until the head of the welcoming committee is found strangled to death with a club member's yarn.

Now Eden feels compelled to honor her commitment as constable and herd together the clues, figure out which ones are dogs, and which ones will lead to a ruthless killer...
Series: Reed, Hannah, 1953- Scottish Highlands mysteries.
Subjects:
Women novelists -- Fiction.
Americans -- Scotland -- Fiction.
Sheep dog trials -- Fiction.
Murder -- Fiction.
Highlands (Scotland) -- Fiction.