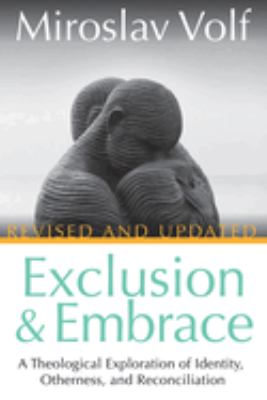 A Theological Exploration of Identity, Otherness, and Reconciliation

Volf, Miroslav, author.
Format: Book
Edition: Revised and updated.
Description: xiii, 384 pages ; 23 cm
Identity talk and identity conflicts have exploded at the beginning of the twenty-first century-on university campuses, in electoral politics, and on the world stage. Shadowing this intense concern is the practice of exclusion, often to the point that the mere fact of being different-of belonging to a different religion, a different race, a different ethnic group, or a different nation-is enough to make a person the target of vilification and violence. By drawing on the character of God and on salvation as reconciliation, and anchoring both in the New Testament story of the prodigal son, Volf develops a vision of embrace as a theological response to the problem of exclusion. The first edition of Exclusion and Embrace won the prestigious Grawemeyer Award in Religion (2002) and was named among the one hundred best books of the twentieth century by Christianity Today. In the book, Volf, a Croatian by birth, responded to the identity-centered war in the former Yugoslavia, with its widespread practice of "ethnic cleansing," by developing a rich account of identity and its relation to difference, in this second edition, which also includes a response to his critics, Volf shows why and how the book is more relevant in today's world of resurgent and clashing identities than it was when he originally wrote it. Truth matters, justice matters, peace matters, and we don't need to sacrifice them at the altar of our individual and collective identities. In fact, if we lose them, not only do we lose the goodness of our particular identities but we compromise our very humanity. Book jacket.
Subjects:
Identification (Religion).
Reconciliation -- Religious aspects -- Christianity.