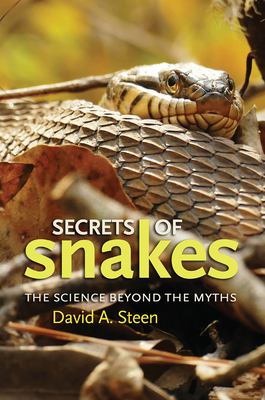 The Science Beyond the Myths

Steen, David A., 1979- author.
Format: Book
Edition: First edition.
Description: xvii, 164 pages : color illustrations ; 24 cm.
Snakes inspire extreme reactions. Love or hate these limbless reptiles, almost everyone is fascinated by them. Although snakes are widespread and frequently encountered, they may be more misunderstood than any other group of animals. From giant rattlesnakes to mating dances, there are dozens of myths and misconceptions about snakes. In Secrets of Snakes: The Science beyond the Myths , wildlife biologist David Steen tackles the most frequently asked questions and clears up prevailing myths.

In a conversational style with a bit of humor, Steen presents the relevant biology and natural history of snakes, making the latest scientific research accessible to a general audience. When addressing myths about snakes, he explains how researchers use the scientific method to explain which parts of the myth are biologically plausible and which are not.

Steen also takes a close look at conventional wisdom and common advice about snakes. For example, people are told they can distinguish coralsnakes from non-venomous mimics by remembering the rhyme, "red on black, friend of Jack, red on yellow, kill a fellow," but this tip is only relevant to coralsnakes and two mimics living in the southeastern United States, and it does not always work with other species or in other countries.

Enhanced by more than 100 stunning color photographs and three original drawings, Secrets of Snakes: The Science beyond the Myths encourages readers to learn about the snakes around them and introduces them to how scientists use the scientific method and critical thinking to learn about the natural world.