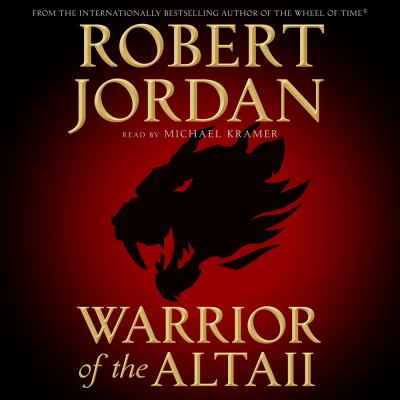 Jordan, Robert
Format: Eaudiobook
Epic fantasy legend, and author of #1 New York Times bestselling series The Wheel of Time®, Robert Jordan's never-before published novel, Warrior of the Altaii : Draw near and listen, or else time is at an end. The watering holes of the Plain are drying up, the fearsome fanghorn grow more numerous, and bad omens abound. Wulfgar, a leader of the Altaii people, must contend with twin queens, warlords, prophets and magic in hopes of protecting his people and securing their future. Elspeth, a visitor from another world, holds the answers, but first Wulfgar must learn to ask the right questions. But what if the knowledge that saves the Altaii will also destroy them? "Jordan has come to dominate the world Tolkien began to reveal." — The New York Times Explore Robert Jordan's epic fantasy masterpiece, and enter the realm of The Wheel of Time® Prequel: New Spring #1 The Eye of the World #2 The Great Hunt #3 The Dragon Reborn #4 The Shadow Rising #5 The Fires of Heaven #6 Lord of Chaos #7 A Crown of Swords #8 The Path of Daggers #9 Winter's Heart #10 Crossroads of Twilight #11 Knife of Dreams By Robert Jordan and Brandon Sanderson #12 The Gathering Storm #13 Towers of Midnight #14 A Memory of Light By Robert Jordan and Teresa Patterson The World of Robert Jordan's The Wheel of Time By Robert Jordan, Harriet McDougal, Alan Romanczuk, and Maria Simons The Wheel of Time Companion By Robert Jordan and Amy Romanczuk Patterns of the Wheel: Coloring Art Based on Robert Jordan's The Wheel of Time
Other Authors:
Kramer, Michael
Overdrive Inc.