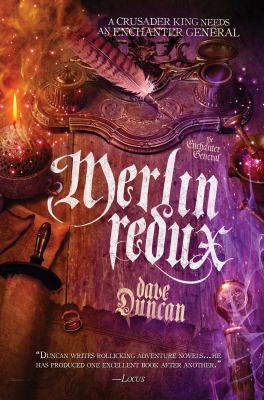 Duncan, Dave, 1933-2018, author.
Format: Book
Description: 266 pages ; 22 cm.
"King Henry is dead; Richard the Lionheart now rules England. The new king does not believe in magic, and is interested only in a crusade to recapture Jerusalem. But his crusade soon stalls, and while he is away, his brother, John, and his supposed ally, Philip of France, are conspiring to steal his kingdom. Richard's mother, Queen Eleanor, sends Sir Durwin, Enchanter General of England, out to Palestine, where he must convince the skeptical king that a loyal magician can be a valuable aide. Meanwhile, King Philip has turned all of Europe into a trap for Richard. The moment the Lionheart sets foot there, he will be arrested and imprisoned for life. It is up to Durwin, aided by his old friend William Legier, to see Richard safely home again and to save the kingdom from falling into the hands of the sadistic and treacherous Prince John . . "-- Provided by publisher.
Series: Duncan, Dave, 1933-2018. Enchanter General ; 3.
Subjects:
Richard I, King of England, 1157-1199 -- Fiction.
Plantagenet, House of -- Fiction.
Kings and rulers -- Fiction.
Conspiracies -- Fiction.
Wizards -- Fiction.
Magic -- Fiction.
Great Britain -- History -- Richard I, 1189-1199 -- Fiction.