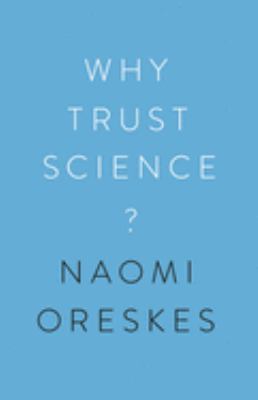 Oreskes, Naomi, author.
Format: Book
Description: x, 360 pages : illustrations ; 23 cm.
Why the social character of scientific knowledge makes it trustworthy Do doctors really know what they are talking about when they tell us vaccines are safe? Should we take climate experts at their word when they warn us about the perils of global warming? Why should we trust science when our own politicians don't? In this landmark book, Naomi Oreskes offers a bold and compelling defense of science, revealing why the social character of scientific knowledge is its greatest strength -- and the greatest reason we can trust it. Tracing the history and philosophy of science from the late nineteenth century to today, Oreskes explains that, contrary to popular belief, there is no single scientific method. Rather, the trustworthiness of scientific claims derives from the social process by which they are rigorously vetted. This process is not perfect -- nothing ever is when humans are involved -- but she draws vital lessons from cases where scientists got it wrong. Oreskes shows how consensus is a crucial indicator of when a scientific matter has been settled, and when the knowledge produced is likely to be trustworthy. -- Publisher's description.
Series: University Center for Human Values series.
Contents: Introduction / Stephen Macedo -- Why trust science? : perspectives from the history and philosophy of science -- Science awry -- Coda: Values in science -- Comments. The epistemology of frozen peas : innocence, violence, and everyday trust in twentieth-century science / Susan Lindee ; What would reasons for trusting science be? / Marc Lange ; Pascal's wager reframed : toward trustworthy climate policy assessments for risk societies / Ottmar Edenhofer and Martin Kowarsch ; Comments on the present and future of science, inspired by Naomi Oreskes / Jon A. Krosnick -- Response. Reply -- Afterword.
Subjects:
Science -- Social aspects.
Science -- Philosophy.

The collapse of Western civilization : a view from the future
Oreskes, Naomi, author.