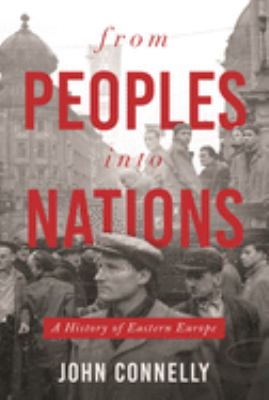 A History of Eastern Europe

Connelly, John, author.
Format: Book
Description: viii, 956 pages : illustrations ; 25 cm
"This book is a history of East Central Europe since the late eighteenth century, the region of Europe between German central Europe and Russia in the East. Connelly argues the region, for which it is frequently hard to define exact boundaries and which is sometimes treated country-by-country in a way seemingly separate from the broader trends of European history, was one of shared experience despite most of the peoples being divided by linguistic, geographic, and political barriers. Beginning in the 1780s, an unwitting Habsburg monarch -- Joseph II -- decreed that his subjects would use only German, as he hoped to mould a common nationality using German over the disparate subjects. Instead, he unleashed the energies and struggle for the emergence of new nations that pitted small peoples armed with an idea against empires. The author argues that the underlying national self-assertion which emerged under imperial rule in the eighteen and nineteenth centuries shows deep connections to subsequent histories, to the creation of nation states of the regions after World War I, the failure of democratic rule in these states during the interwar years, the submersion of the region under Nazi then Soviet rule after 1939, and to the reinvention of sovereign states (and then the break up of two of them) after 1989. The book interconnects major themes and country histories for first time, chronicling this diverse region over many generations, from the time of Joseph, through democratic and socialist revolutions, genocide and Stalinism, through civil society movements struggling for liberal democracy, into our own day, when illiberal politicians come to power by exploiting very old fears"-- Provided by publisher.
Contents: Peoples of East Central Europe -- Ethnicity on the edge of extinction -- Linguistic nationalism -- Nationality struggles : from idea to movement -- Insurgent nationalism : Serbia and Poland -- Cursed are the peacemakers : 1848 in East Central Europe -- The reform that made the monarchy unreformable : the 1867 compromise -- 1878 Berlin Congress : Europe's new ethno-nation states -- The origins of National Socialism : fin de siecle Hungary and Bohemia -- Liberalism's heirs and enemies : socialism versus nationalism -- Peasant utopias : villages of yesterday and societies of tomorrow -- 1919 : a new Europe and its old problems -- The failure of national self-determination -- Fascism takes root : Iron Guard and Arrow Cross -- East Europe's anti-fascism -- Hitler's war and its East European enemies -- What Dante did not see : the Holocaust in Eastern Europe -- People's democracy : early postwar Eastern Europe -- The Cold War and Stalinism -- Destalinization : Hungary's revolution -- National paths to communism : the 1960s -- 1968 and the Soviet bloc : reform communism -- Real existing socialism : life in the Soviet bloc -- The unraveling of communism -- 1989 -- East Europe explodes : the wars of Yugoslav succession -- East Europe joins Europe.
Subjects:
Nationalism -- Europe, Eastern -- History.
Europe, Eastern -- History.
Europe, Eastern -- History -- Autonomy and independence movements.
Europe, Eastern -- Politics and government.