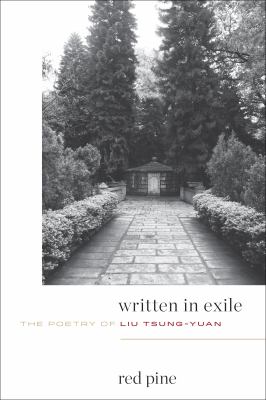 The Poetry of Liu Tsung-Yuan

Liu, Zongyuan, 773-819, author.
Format: Book
Description: xxxvi, 257 pages : illustrations, maps ; 23 cm
"After a failed push for political reform, the T'ang era's greatest prose-writer, Liu Tsung-yuan, was exiled to the southern reaches of China. Thousands of miles from home and freed from the strictures of court bureaucracy, he turned his gaze inward and chronicled his estrangement in poems. Liu's fame as a prose writer, however, overshadowed his accomplishment as a poet. Three hundred years after Liu died, the poet Su Tung-p'o ranked him as one of the greatest poets of the T'ang, along with Tu Fu, Li Pai, and Wei Ying-wu. And yet Liu is unknown in the West, with fewer than a dozen poems published in English translation. The renowned translator Red Pine discovered Liu's poetry during his travels throughout China and was compelled to translate 140 of the 146 poems attributed to Liu. As Red Pine writes, 'I was captivated by the man and by how he came to write what he did.' Appended with thoroughly researched notes, an in-depth introduction, and the Chinese originals, Written in Exile presents the long-overdue introduction of a legendary T'ang poet"-- Provided by publisher.
Other Authors:
Red Pine, 1943- translator.
Subjects:
Liu, Zongyuan, 773-819 -- Translations into English.
Chinese poetry -- 221 B.C.-960 A.D. -- Translations into English.

Hold
Book
1 of 1 available
Save to List
Includes bibliographical references.
Poems in English and Chinese from the Chinese, notes and Introduction in English.