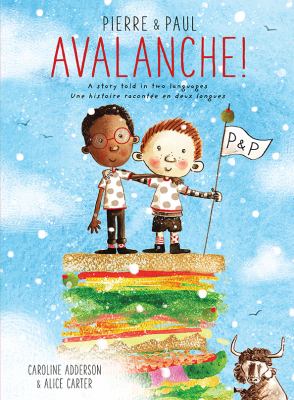 Adderson, Caroline/ Carter, Alice (ILT)
Format: Book
Description: 32 pages ;
Pierre and Paul are neighbors, friends, and explorers. Pierre speaks French and Paul speaks English, but that doesn't stop them from sharing their adventures. The boys imagine everyday situations into grand exploits--today, they are climbing the Himalayas!

To fuel their journey, they decide to make a mountainous sandwich. Pierre and Paul add ingredients until the sandwich staggers, topples, and...avalanche! Ham and fromage , laitue and cucumber jumble until they become a salad. The boys don't really like salad...but explorers have to be brave.

This story is told half in French and half in English, with simple phrasing and visual cues in the illustrations making the story easy for early readers to decode in both languages. Illustrations in a loose, colorful style make this vocabulary-learning tool also an engaging story of friendship and imagination.
ISBN: 1771473274