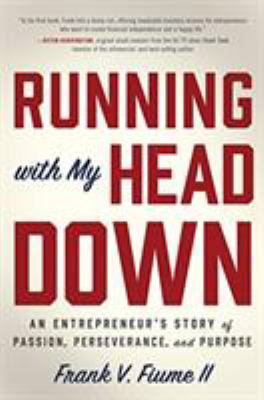 An Entrepreneur's Story of Passion, Perseverance, and Purpose

A no-holds-barred rags-to-riches story of finding your purpose and living a life of no regrets.

Running with My Head Down is the inspirational story of one man''s search for purpose and meaning, a quest without limitation that ultimately leads to unique business success and personal fulfillment.

A native of Queens, New York, Frank was born into a working-class family, surrounded by the unified love of his parents. But in the mid-1970s, the nine-year-old was deeply impacted by his parents'' divorce. Emotional and financial turmoil follow, fueling Frank''s burning passion to discover his direction in life, and with it, certainty and security.

During his difficult school years when Frank was underestimated by teachers, he discovered his love of baseball--not just playing it, but becoming a fanatical student of the game. It became an all-out obsession that he would later turn into a multi-million-dollar franchise sports business by creating his own leagues.

Follow Frank''s journey from his early days after college unhappily working in medical sales to the brilliant stroke of starting an adult softball league--and then to strategically expanding his dream by creating i9 Sports, which becomes the nation''s largest youth sports franchise. After much inner struggle about defining his true purpose in life, Frank ultimately sell his company, having had a startling epiphany.

Through it all, we see how Frank''s purpose finds him again and again. A series of unique people come into his life, including peak performance coach Tony Robbins, who has a profound effect on Frank''s personal development. No matter what obstacles arise, Frank remains laser-focused, always purposely running with his head down.

This guide to personal and professional growth is filled with valuable strategies relevant to entrepreneurs and anyone who wants to lead a happier life. Transformative lessons and business insights include--

* The Passion Priority: How to transform the needs of your soul into reality, channeling the power of your vision.

* The Live Your Life With No Regrets Motto: Learn when to take a risk and go all in--banking on passion, not on security.

* The Entrepreneur Identity Crisis: How to overcome the self-limiting belief that your identity is your business.

* The Lonely at the Top Syndrome: How to build a solid relationship with your employees without losing your authority and the secret to overcoming CEO isolation.

* The Executive Burnout Phase: Identifying the signs of mental and physical overload and utilizing powerful techniques for restoring life balance.

* The Affluenza Affair: How to recreate the spark in your business in order to feel the same ambition and hunger as you once did.

* The Critics and Crises: How to handle internal company crises and external criticism.

* The Influence of Family and Friends: How to deal with a skeptical support network--and what to do when their advice, values, and judgments don''t match yours.

* The Spiritual Awakening: How to expand your self-awareness through a passionate commitment to personal growth and self-care.

Frank graduated from St. John''s University and began a career as a medical equipment sales rep, though he was determined to pursue his life''s true purpose. So in l995, he created his own adult men''s softball league, ABA Sports. The start-up company quickly grew to over 900 teams in just six years, making it the largest adult sports organization on Long Island.

In 2003, Frank sold ABA Sports in order to create i9 Sports, a business that catapulted him to national recognition and that Entrepreneu r magazine ranked as the #1 children''s fitness franchise. Frank has been featured on Fox Business News , HBO Real Sports , and in dozens of publications and national news media outlets, including USA Today , Sports Illustrated , and The Wall Street Journal . Frank sold i9 Sports in 2017 to a private equity firm, but remains a minority shareholder and member of the board of directors.

He resides in the Tampa Bay area with his wife, Nadine, their children, Taylor-Marie and Frankie, and their Chocolate Lab, Dillon.