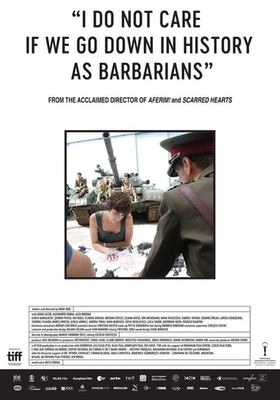 Format: DVD
Edition: Widescreen ed.
Description: 1 videodisc (approximately 140 min.) : sound, color ; 4 3/4 in.
Chronicles a young theatre director's efforts to stage an accurate re-enactment of the Odessa Massacre, in which Romanian soldiers slaughtered tens of thousands of Ukrainian Jews, despite the municipal government's attempt to censor the director's efforts. Her choice angers a city official who threatens to close the production because of its "anti-Romanian" take on history. However, the reaction to the staged play is one that neither anticipated.
Other Authors:
Iacob, Ioana.
Bogdan, Alex.
Dabija, Alexandru.

I Do Not Care If We Go Down in History As Barbarians.