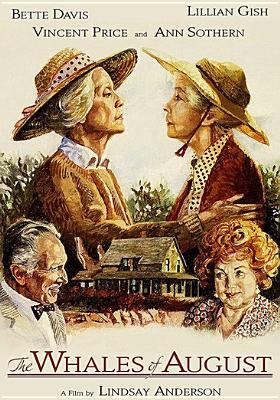 Format: DVD
Edition: Widescreen ed.
Description: 2 videodiscs (ca. 90 min.) : sd., col. ; 4 3/4 in.
It's August. Like they have most summers, elderly widowed sisters Libby Strong and Sarah Webber, who live in Philadelphia, are staying together in the family's summer cottage on an island off the coast of Maine. There are a few people who have been half-century friends or acquaintances on the island, including Tisha Doughty and Joshua Brackett.
Other Authors:
Davis, Bette
Gish, Lillian
Price, Vincent
Sothern, Ann
Steenburgen, Mary
Ladd, Margaret
Sterling, Tisha
Carey Jr., Harry

The Whales of August