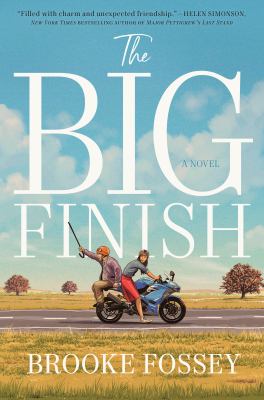 Fossey, Brooke, author.
Format: Book
Edition: First edition.
Description: 326 pages : illustrations ; 24 cm
"An unlikely friendship between a curmudgeonly old man and a desperate young woman delivers a funny and uplifting message about the power of human connection and how it's never too late to be the person you wanted to be. Eighty-eight-year-old Duffy Sinclair wants the last leg of his bachelor life to be strictly predictable, so Centennial Assisted Living is perfect: low-sodium meals, off-key sing-alongs, and the company of his best pal and roommate, Carl. It may not sound like much, but compared to the piss-smelling, roach-infested nursing home down the road, Centennial is paradise. There's only one problem: Carl's estranged granddaughter, Josie, has just clambered through their bedroom window. Though she claims it's a well-intentioned visit, her bare feet and black eye say otherwise. Carl begs Duffy to let her stay - she's all that's left of his family. But hiding her means risking eviction, and Duffy would rather die than move, just like he would rather die than fall off the wagon again. That's why when he sniffs out Josie's alcoholic tendencies, he has no choice but to go against Carl's wishes and chase her off. But before Duffy knows it, Josie's heartfelt plight has won him over, and he finds himself risking everything he has left to save his newfound family and discover what it really means to live"--Provided by publisher.
Subjects:
Older men -- Fiction.
Young women -- Fiction.
Friendship -- Fiction.
Interpersonal relations -- Fiction.
Congregate housing -- Fiction.