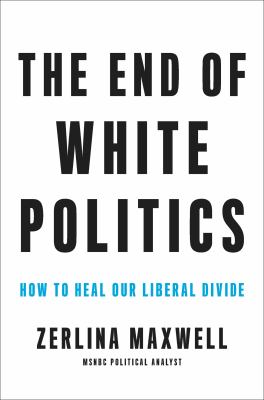 How to Heal Our Liberal Divide

Maxwell, Zerlina, author.
Format: Book
Edition: First edition.
Description: v, 206 pages ; 24 cm
"In the entire history of the United States of America, we've never elected a woman as our president. And we've only had one president who was not a white man. After working on two presidential campaigns (for Barack Obama and Hillary Clinton), MSNBC political analyst and SiriusXM host Zerlina Maxwell gained first-hand knowledge of everything liberals have been doing right over the past few elections--and everything they are still doing wrong... Maxwell argues that it's the "liberal-minded" party's struggle to engage women and communities of color--and its preoccupation with catering to the white, male working class--that threatens to be its most lethal shortfall. The times--and the demographics-are changing, and in order for progressive politics to prevail, we must acknowledge our shortcomings, take ownership of our flaws, and do everything in our power to level the playing field for all Americans."-- provided by publisher
Contents: Introduction: what now, Liberals? -- Demonized politics -- Bernie bros exist and so does white privilege -- The white resistance -- The Obama Coalition -- In black women we trust -- The hashtag kids -- The blue wave is not Uncle Joe -- The billionaire boys' club -- Conclusion: the path forward.
Subjects:
Racism.
Race relations.
Presidents -- Election -- History.
Liberalism -- United States.
United States -- Politics and government -- 21st century.