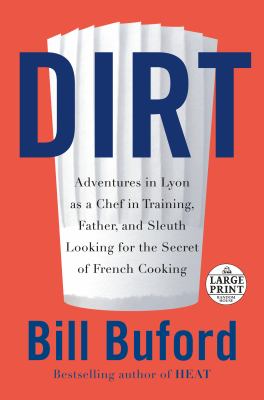 Adventures in Lyon As a Chef in Training, Father, and Sleuth Looking for the Secret of French Cooking

Buford, Bill, author.
Format: Large Print
Edition: First large print edition.
Description: viii, 628 pages ; 24 cm
"Bill Buford turns his inimitable attention from Italian cuisine to the food of France. Baffled by the language, but convinced that he can master the art of French cooking - or at least get to the bottom of why it is so revered - he begins what becomes afive-year odyssey by shadowing the esteemed French chef, Michel Richard, in Washington, D.C. But when Buford (quickly) realizes that a stage in France is necessary, he goes--this time with his wife and three-year-old twin sons in tow--to Lyon, the gastronomic capital of France. Studying at Institut Bocuse, cooking at the storied, Michelin-starred Mère Brazier, enduring the endless hours and exacting "rigeur" of the kitchen, Buford becomes a man obsessed with proving himself on the line, proving that he is worthy of the gastronomic secrets he's learning, proving that French cooking actually derives from (mon dieu!) the Italian. With his signature humor, sense of adventure, and masterful ability to immerse himself, and us, in his surroundings, Bill Bufordhas written what is sure to be the food-lover's book of the year"-- Provided by publisher.
Subjects:
Burford, Bill -- Travel -- France -- Lyon.
Cooks -- United States.
Cooking -- France -- History.
Food habits -- France.
Large type books.
Lyon (France) -- Description and travel.