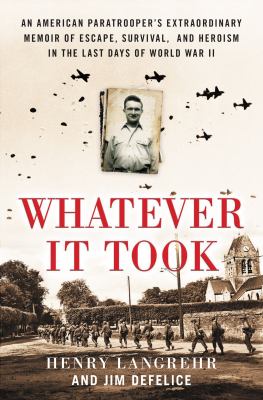 An American Paratrooper's Extraordinary Memoir of Escape, Survival, and Heroism in the Last Days of World War II

Langrehr, Henry, author.
Format: Book
Edition: First edition.
Description: 272 pages, 16 unnumbered pages of plates : illustrations, map ; 24 cm
"Now at 95, one of the few living members of the Greatest Generation shares his experiences at last in one of the most remarkable World War II stories ever told. As the Allied Invasion of Normandy launched in the pre-dawn hours of June 6, 1944, Henry Langrehr, an American paratrooper with the 82nd Airborne, was among the thousands of Allies who parachuted into occupied France. Surviving heavy anti-aircraft fire, he crashed through the glass roof of a greenhouse in Sainte-Mère-Église. While many of the soldiers in his unit died, Henry and other surviving troops valiantly battled enemy tanks to a standstill. Then, on June 29th, Henry was captured by the Nazis. The next phase of his incredible journey was beginning. Kept for a week in the outer ring of a death camp, Henry witnessed the Nazis' unspeakable brutality--the so-called Final Solution, with people marched to their deaths, their bodies discarded like cords of wood. Transported to a work camp, he endured horrors of his own when he was forced to live in unbelievable squalor and labor in a coal mine with other POWs. Knowing they would be worked to death, he and a friend made a desperate escape. When a German soldier cornered them in a barn, the friend was fatally shot; Henry struggled with the soldier, killing him and taking his gun. Perilously traveling westward toward Allied controlled land on foot, Henry faced the great ethical and moral dilemmas of war firsthand, needing to do whatever it took to survive. Finally, after two weeks behind enemy lines, he found an American unit and was rescued. Awaiting him at home was Arlene, who, like millions of other American women, went to work in factories and offices to build the armaments Henry and the Allies needed for victory. Whatever It Took is her story, too, bringing to life the hopes and fears of those on the homefront awaiting their loved ones to return. A tale of heroism, hope, and survival featuring 30 photographs, Whatever It Took is a timely reminder of the human cost of freedom and a tribute to unbreakable human courage and spirit in the darkest of times."--Amazon.com
Other Authors:
DeFelice, Jim, 1956- author.
Contents: VE Day, 1945 -- Middle America -- Training up -- June 1944 -- Drop zone -- Hedgerows -- Prisoner -- The mines -- The war outside the fence -- Opportunity -- What had to be done -- Home -- Survival's rewards -- Going back.
Subjects:
Langrehr, Henry.
United States. Army. Airborne Division, 82nd -- Biography.
United States. Army -- Parachute troops -- Biography.
United States. Army.
1939-1945
World War, 1939-1945 -- Personal narratives, American.
World War, 1939-1945 -- Campaigns -- France -- Normandy -- Biography.
World War, 1939-1945 -- Prisoners and prisons, American.
Military campaigns.
France -- Normandy.
World War (1939-1945) 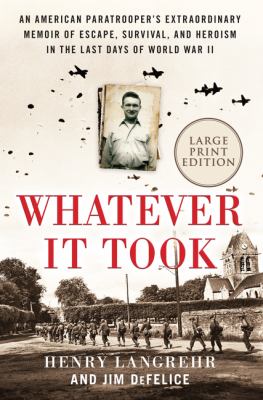 Whatever it took : an American paratrooper's extraordinary memoir of escape, survival, and heroism in the last days of World War II
Langrehr, Henry, author.