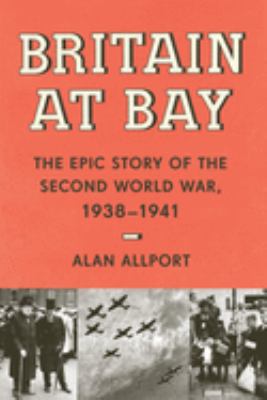 Allport, Alan, 1970- author.
Format: Book
Edition: First edition.
Description: pages cm
"Here is the many-faceted, world-historically significant story of Britain at war. In looking closely at the military and political dimensions of the conflict's first crucial years, Alan Allport tackles questions such as: Could the war have been avoided?Could it have been lost? Were the strategic decisions the rights ones? How well did the British organize and fight? How well did the British live up to their own values? What difference did the war make in the end to the fate of the nation? In answering these and other essential questions he focuses on the human contingencies of the war, weighing directly at the roles of individuals and the outcomes determined by luck or chance. Moreover, he looks intimately at the changes in wartime British society and culture. Britain at Bay draws on a large cast of characters--from the leading statesmen and military commanders who made the decisions, to the ordinary men, women, and children who carried them out and lived through their consequences--in a comprehensibleand compelling single history of forty-six million people. For better or worse, much of Britain today is ultimately the product of the experiences of 1938-1941"-- Provided by publisher.
Contents: Shire Folk -- Ulster Kristallnacht -- A Different Kind of Nation -- The School of Empire -- Guilty Man -- The Bones of a British Grenadier -- The Stupidest Thing That Has Ever Been Done -- To Make Gentle the Life of the World -- The Sharpening of the Claws -- The Other Dunkirk -- Class War -- Bras-Dessus, Bras-Dessous -- In the Name of God -- A Certain Eventuality -- Lunatic Relief -- All Our Past Proclaims Our Future -- Margins -- The Scouring of the Shire Folk -- American Lebensraum -- Shapeless, Measureless Peril -- The Carotid Artery of Empire -- Taking the Gloves Off -- March on to Better Days.
Subjects:
World War, 1939-1945 -- Great Britain.
World War, 1939-1945 -- Campaigns -- Great Britain.
World War, 1939-1945 -- Social aspects -- Great Britain.
Great Britain -- Politics and government -- 1936-1945.
Great Britain -- Social conditions -- 20th century.