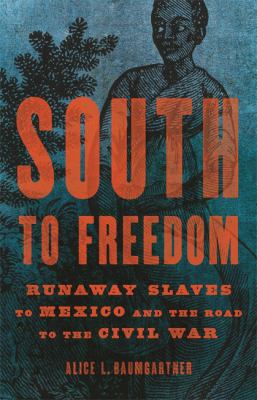 Runaway Slaves to Mexico and the Road to the Civil War

Baumgartner, Alice, 1987- author.
Format: Book
Description: pages cm
"The Underground Railroad to the North was salvation for many US slaves before the Civil War. But during the same decades, thousands of people in the south-central United States escaped slavery not by heading north but by crossing the southern border intoMexico. In South to Freedom historian Alice Baumgartner tells the story of Mexico's rise as an antislavery republic and a promised land for enslaved people in North America. She describes how Mexico's abolition of slavery challenged US institutions and helped to set the international stage for the US Civil War. In 1837, shortly after Texas rebelled against Mexican rule, Mexico's Congress formally abolished slavery, and enslaved people began to head south. Some were helped by free blacks, ship captains, Mexicans, Germans, gamblers, preachers, mail riders, and other "lurking scoundrels," but most escaped by their own ingenuity -- with stolen rifles, forged slave passes, and, in one instance, a wig made from horsehair and pitch. As they fled across the RioGrande, and the US government failed to secure their return, their owners began to suspect an international conspiracy against the "peculiar institution." Meanwhile, Northern Congressmen balked at reestablishing slavery in the Southwestern territories taken from Mexico after the Mexican-American War. Feeling increasingly embattled, slavers in Texas and Louisiana came to believe that their interests would best be protected outside the union. With the Southern slave regime under pressure from both the northand south, the conditions were in place for the coming of the US Civil War. Today, our attention is fixed on people seeking opportunity by moving north across our southern border, but South to Freedom reveals what happened when the reverse was true: whenAmerican slaves fled "the land of the free" for freedom in Mexico"-- Provided by publisher.
Contents: Defending slavery--The meaning of liberty--The right to property--An antislavery republic--In accordance with the laws, they are free--The Texas Revolution--Annexation--Compromise lost--Liberty found--The balance of power--Citizenship--War.
Subjects:
Fugitive slaves -- Mexico -- History -- 19th century.
Fugitive slaves -- United States -- History -- 19th century.
Slavery -- Mexico -- History -- 19th century.
Slavery -- United States -- History -- 19th century.
United States -- History -- Civil War, 1861-1865 -- Causes.