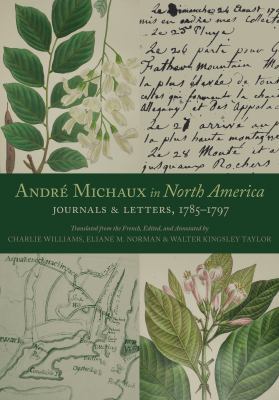 Known to today's biologists primarily as the "Michx." at the end of more than 700 plant names, André Michaux was an intrepid French naturalist. Under the directive of King Louis XVI, he was commissioned to search out and grow new, rare, and never-before-described plant species and ship them back to his homeland in order to improve French forestry, agriculture, and horticulture. He made major botanical discoveries and published them in his two landmark books, Histoire des chênes de l'Amérique (1801), a compendium of all oak species recognized from eastern North America, and Flora Boreali-Americana (1803), the first account of all plants known in eastern North America.

Straddling the fields of documentary editing, history of the early republic, history of science, botany, and American studies, André Michaux in North America: Journals and Letters, 1785-1797 is the first complete English edition of Michaux's American journals. This copiously annotated translation includes important excerpts from his little-known correspondence as well as a substantial introduction situating Michaux and his work in the larger scientific context of the day.

To carry out his mission, Michaux traveled from the Bahamas to Hudson Bay and west to the Mississippi River on nine separate journeys, all indicated on a finely rendered, color-coded map in this volume. His writings detail the many hardships--debilitating disease, robberies, dangerous wild animals, even shipwreck--that Michaux endured on the North American frontier and on his return home. But they also convey the soaring joys of exploration in a new world where nature still reigned supreme, a paradise of plants never before known to Western science. The thrill of discovery drove Michaux ever onward, even ultimately to his untimely death in 1802 on the remote island of Madagascar.