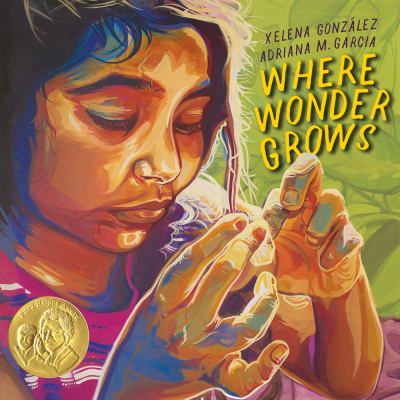 
A children's picture book about a grandmother bonding with her granddaughters as she teaches them how much they can learn from nature just by being curious.

Grandma knows that there is wondrous knowledge to be found everywhere you can think to look. She takes her girls to their special garden, and asks them to look over their collection of rocks, crystals, seashells, and meteorites to see what marvels they have to show. "They were here long before us and know so much more about our world than we ever will," Grandma says. So they are called grandfathers. By taking a close look with an open mind, they see the strength of rocks shaped by volcanoes, the cleansing power of beautiful crystals, the oceans that housed their shells and shapes its environment, and the long journey meteorites took to find their way to them. Gathered together, Grandma and the girls let their surroundings spark their imaginations.

This is a wonderful book to foster a loving intergenerational family bond. With its dazzling illustrations and poetic text, it's also the perfect book to encourage the curiosity of little ones and cultivate an enthusiastic approach to learning.

Xelena González is a storyteller, screenwriter, poet, and author of ALL AROUND US, winner of multiple accolades, including the Tomás Rivera Mexican American Children's Book Award, an American Indian Youth Literature Honor Award, and an International Latino Book Award. Her storytelling skills were honed as a children's librarian in San Antonio and in Guangzhou, China. As a visiting author, she has introduced her method of "tai chi storytelling" to more than 60 schools and libraries around the country. In February 2021, Cinco Puntos Press will release WHERE WONDER GROWS, her much-anticipated sophomore collaboration with muralist Adriana M. Garcia.

With grant support from the National Association of Latino Arts and Culture, Xelena recently developed a body of work in both children's literature and visionary fiction, inspired by the iconography of the Mexican Lotería card game. Her resultant book LOTERÍA REMEDIOS led to the creation of a television script centered on the same theme and featuring a modern Mestiza protagonist. She is currently developing the screenplay THE CARD SINGER with support from the Luminaria Artist Foundation. A member of the Tap Pilam Coahuiltecan Nation, Xelena is a sought-after speaker on topics such as radical self love, creative early literacy strategies, inhabiting story through music and movement, and reclaiming indigenous identity in Latinx communities.

Adriana M. Garcia, is a home-grown San Antonio visual artist, muralist, and illustrator. Her debut picture book ALL AROUND US (by Xelena Gonzalez) was awarded the prestigious 2018 Pura Belpré Honor for illustration among other honors. One of Garcia's favorite mural creation "Changing the World" is installed at Northwest Vista College (Fall 2019) and centers around access to education. The mural project "De Todos Caminos Somos Todos Uno" completed for the San Antonio River Authority was recognized in the 2019 Public Art Network Year in Review. Adriana has exhibited her artwork both locally and nationally and has been invited to present at conferences, schools and museums. She has enjoyed working as an arts administrator and an art/design instructor for both youth and adult learners. She is a big fan of portraits and loves depicting strong women as a way to honor those who have come before and those who continue to lead by example.