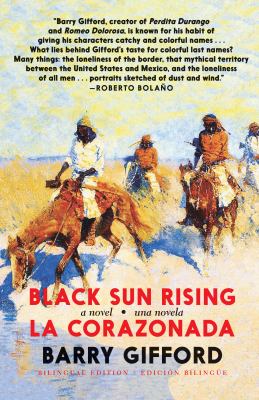 Gifford, Barry, 1946- author.
Format: Book
Edition: Bilingual edition, Ediciaon bilingüe.
Description: 144, 144 pages : illustrations ; 21 cm
"Based on historical events in 1851, this Western noir novella traces the struggle of the first integrated Native American tribe to establish themselves on the North American continent. After escaping the Oklahoma relocation camps they had been placed infollowing their forced evacuation from Florida, the Seminole Indians banded with fugitive slaves from the American South to fulfill the vision of their leader, Coyote, to establish their land in Mexico's Nacimiento. The Mexican government allowed them initially to settle in Mexico near the Texas-Mexico border, in exchange for guarding nearby villages from bands of raiding Comanches and Apaches. On the Texas side of the border, a romance begins between Teresa, daughter of former Texas Ranger and slavehunter Cass Dupuy, and Sunny, son of the great Seminole chief Osceola. Teresa's father, a violent man, has heard about the fugitive slaves settled on the other side of the border and plans to profit from them. As the story progresses, multiple actors come intoplay, forming alliances or declaring each other enemy, as the Seminoles struggle to fulfill captain Coyote's corazonada to find their own land. Black Sun Rising is a poetic story which brings to light a little-known but important chapter in American andMexican history and will be simultaneously published in Mexico by Almadaia. One of America's greatest novelists and a tireless innovator whose oeuvre spans fiction, autobiography, oral history, and short fiction, Barry Gifford is now venturing into the genre of Western, breaking new ground by infusing it with his signature noir style"-- Provided by publisher.
Other Authors:
Pacheco, Laura Emilia, translator.
Gifford, Barry, 1946- Corazonada.

Hold
Book
0 of 1 available
Save to List
Titles from separate title pages; works bound back to back and inverted.