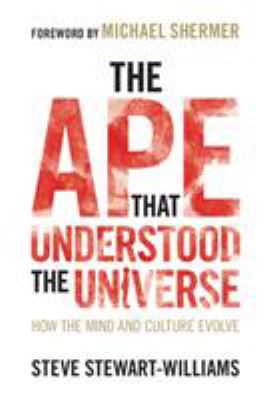 How the Mind and Culture Evolve (Revised)

Stewart-Williams, Steve
Format: Book
"The Ape That Understood the Universe is the story of the strangest animal in the world: the human animal. It opens with a question: How would an alien scientist view our species? What would it make of our sex differences, our sexual behavior, our child-rearing patterns, our moral codes, our religions, languages, and science? The book tackles these issues by drawing on ideas from two major schools of thought: evolutionary psychology and cultural evolutionary theory. The guiding assumption is that humans are animals, and that like all animals, we evolved to pass on our genes. At some point, however, we also evolved the capacity for culture - and from that moment, culture began evolving in its own right. This transformed us from a mere ape into an ape capable of reshaping the planet, travelling to other worlds, and understanding the vast universe of which we're but a tiny, fleeting fragment" --Dust jacket flap.
Contents: The alien's challenge -- Darwin comes to mind -- The SeXX/XY animal -- The dating, mating, baby-making animal -- The altruistic animal -- The cultural animal -- Appendix A. How to win an argument with a blank slater -- Appendix B. How to win an argument with an anti-memeticist -- Permissions -- Notes
Subjects:
Evolutionary psychology.
Human behavior.
Culture.
Interpersonal relations.
Culture.
SCIENCE -- Life Sciences -- Evolution.

Hold
Book
1 of 1 available
Save to List
Includes bibliographical references (pages 325-354) and index.