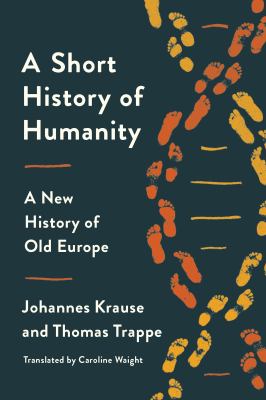 A New History of Old Europe

Krause, Johannes, 1980- author.
Format: Book
Edition: First US edition.
Description: xi, 274 pages : illustrations ; 22 cm
"In this eye-opening book, Johannes Krause, director of the Max Planck Institute for Evolutionary Anthropology, and journalist Thomas Trappe offer a new way of understanding our past, present, and future. Krause is a pioneer in the revolutionary new science of archaeogenetics, archaeology augmented by revolutionary DNA sequencing technology, which has allowed scientists to uncover a new version of human history reaching back more than 100,000 years. Using this technology to re-examine human bones from the distant past, Krause has been able to map not only the genetic profiles of the dead, but also their ancient journeys. In this concise narrative he tells us their long-forgotten stories of migration and intersection. It's well known that many human populations carry genetic material from Neanderthals; but, as Krause and his colleagues discovered, we also share DNA with a newly uncovered human form, the Denisovans. We know now that a wave of farmers from Anatolia migrated into Europe 8,000 years ago, essentially displacing the dark-skinned, blue-eyed hunter-gatherers who preceded them. The farmer DNA is one of the core genetic components of contemporary Europeans and European Americans. Though the first people to cross into North and South America have long been assumed to be primarily of East Asian descent, we now know that they also share DNA with contemporary Europeans and European Americans. Genetics has an unfortunate history of smuggling in racist ideologies, but our most cutting-edge science tells us that genetic categories in no way reflect national borders. Krause vividly introduces us to prehistoric cultures such as the Aurignacians, innovative artisans who carved animals, people, and even flutes from bird bones more than 40,000 years ago; the Varna, who buried their loved ones with gold long before the Pharaohs of Egypt; and the Gravettians, big-game hunters who were Europe's most successful early settlers until they perished in the ice age. This informed retelling of the human epic confirms that immigration and genetic mingling have always defined our species and that who we are is a question of culture not genetics"-- Provided by publisher.
Other Authors:
Trappe, Thomas, author.
Waight, Caroline, translator.

Hold
Book
0 of 2 available
Save to List
"Originally published in Germany by Propyläen Verlag in 2019."
Includes bibliographical references (pages 243-261) and index.