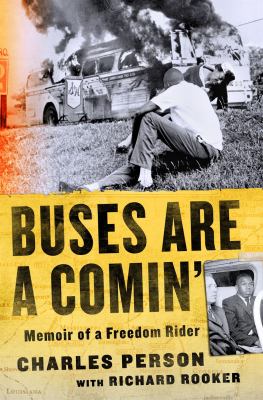 Memoir of a Freedom Rider

Person, Charles, author.
Format: Book
Edition: First edition.
Description: 294 pages ; 22cm
"A firsthand exploration of the cost of boarding the bus of change to move America forward-written by one of the Civil Rights Movement's pioneers. At 18, Charles Person was the youngest of the original Freedom Riders, key figures in the U.S. Civil Rights Movement who left Washington, D.C. by bus in 1961, headed for New Orleans. This purposeful mix of black and white, male and female activists-including future Congressman John Lewis, Congress of Racial Equality Director James Farmer, Reverend Benjamin Elton Cox, journalist and pacifist James Peck, and CORE field secretary Genevieve Hughes-set out to discover whether America would abide by a Supreme Court decision that ruled segregation unconstitutional in bus depots, waiting areas, restaurants, and restrooms nationwide. The Freedom Riders found their answer. No. Southern states would continue to disregard federal law and use violence to enforce racial segregation. One bus was burned to a shell; the second, which Charles rode, was set upon by a mob that beat the Riders nearly to death. Buses Are a Comin' provides a front-row view of the struggle to belong in America, as Charles leads his colleagues off the bus, into the station, into the mob, and into history to help defeat segregation's violent grip on African American lives. It is also a challenge from a teenager of a previous era to the young people of today: become agents of transformation. Stand firm. Create a more just and moral country where students have a voice, youth can make a difference, and everyone belongs"-- Provided by publisher.
Other Authors:
Rooker, Richard, author.
Subjects:
Person, Charles.
Freedom Rides, 1961.
African American civil rights workers -- Biography.
African Americans -- Civil rights -- History.
Segregation -- United States.

Hold
Book
3 of 9 available
Save to List
Includes bibliographical references and index.