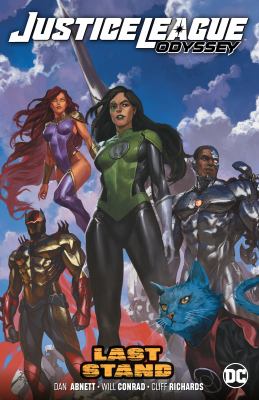 The Justice League Odyssey team makes its final stand against one of the biggest threats in the Mutlvierse--Darkseid.

After fully regaining all of his immense power and corrupting former Justice League members such as Cyborg and Starfire, the dark lord of Apokolips makes an all-out assault on the remaining heroes. To prevent him from returning the planet he rules to reality. Green Lantern Jessica Cruz, New God Orion, and Red Lantern Dex-Starr recruit a new team of oddballs, including a time-traveler with the power to save or destroy all of existence.

With an expolsive ending that leads into Starfire and Cyborg's Dark Nights: Death Metal appearance, this outer space adventure sets new courses for all the characters involved.