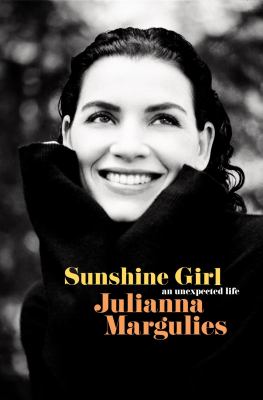 Margulies, Julianna, 1966- author.
Format: Book
Edition: First edition.
Description: xiv, 236 pages, 16 unnumbered pages : illustrations (chiefly color) ; 25 cm
"Known for her outstanding performances on The Good Wife and ER, Julianna Margulies now unleashes her sharp talent with a powerful debut memoir chronicling her life and her work, examining from within, her journey from chaos to calm. "When an actor is on a long running television show, especially when the writing is superb as was the case with The Good Wife, the character becomes a second skin; they grow as you grow, they change as you change. Being an actress gives me the luxury of discovering myself. All the feelings that came up from playing Alicia allowed me to look back at my life and tap into my own vulnerability. My personal fear of the unknown reared its ugly head as I studied this character, most likely stemming from the ever-present unpredictability of my childhood." - From the Introduction An apple-cheeked bubbly child, Julianna Margulies was bestowed the nickname "Sunshine Girl" by her mother at an early age. Raised between two divorced parents, often on different continents, Julianna quickly learned how to be of value to her eccentric mother and her absent father. Raised in fairly unconventional ways in various homes in Paris, England, New York, and New Hampshire, Julianna's role among the turmoil and uncertainty that her parents generated, was to comfort those around her, find organization among the disorder, and eventually make her way in the world as a young adult and eventually an Award-winning actress. Along the way, there were failed romances, difficult choices, and overwhelming rejections. But there was also the moment that fate, faith, and talent assembled in a perfect storm that lead to the roles of a lifetime, both professionally and personally. Sunshine Girl is an accomplished coming of age story that offers readers a rich sense of relatability as well as the intimate details of a life unimagined"-- Provided by publisher.
Contents: Nothing was planned -- From left bank to right bank -- Jesus and the van -- I wanted to be just like them -- Let's just stick it out for the year -- Barely there branches -- Grin and bear it -- Time well spent -- In the Boom Boom Room -- Out for justice -- Grandma Henrietta -- ER -- My decision -- Waking up -- New life -- The whole elephant -- The good wife -- This is where I belong.
Subjects:
Margulies, Julianna, 1966-
Television actors and actresses -- United States -- Biography.