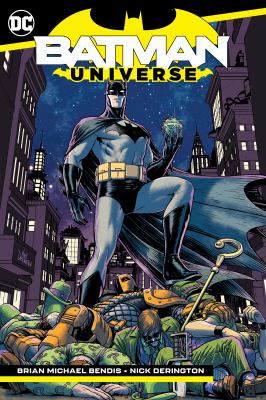 Bendis, Brian Michael/ Derington, Nick (ILT)
Format: Book
Description: 176 pages ;
In this original story written by Brian Michael Bendis, Batman is pushed to his limit as he sets off in search of an item with the potential to destroy the universe as we know it! Batman isn't the only one looking for this item though. It's a race to the finish line with the fate of the universe hanging in the balance!

The Dark Knight embarks on a global adventure!

Batman takes on an old foe outside of the Gotham City limits when the Riddler's theft of a Faberge egg leads the Dark Knight thousands of miles away in search of answers. When the immortal super-villain Vandal Savage joins forces with the Riddler, Batman is transported to the Old West and meets the original owner of the egg, gunslinger Jonah Hex!

Along with Jonah, the Dark Knight teams up with fellow heroes including Green Arrow and Green Lantern on a quest to find the Riddler and crack the egg's dangerous power. But will these superheroes get the edge over the most brilliant villain Batman has ever faced? Or will the Riddler's nefarious scheme run its course exactly as the clever criminal planned?