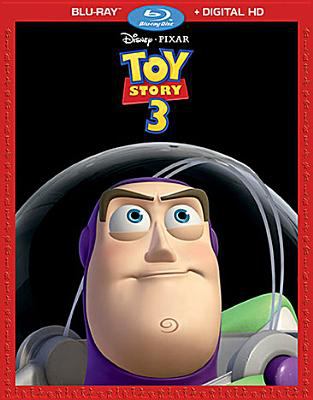 Format: Blu-ray + DVD
Description: 2 videodiscs (103 min.) : sd., col. ; 4 3/4 in.
As Andy prepares to leave for college, his loyal toys find they have been donated to the Sunnyside Daycare, where untamed tots with their sticky little fingers do not play nice. So it's all for one and one for all as they join Barbie's counterpart Ken, a thespian hedgehog named Mr. Pricklepants, and a pink, strawberry-scented teddy bear called Lots-o'-Huggin' Bear to plan their great escape and ensure that no toy gets left behind. **Limited quantities will include bonus DVD version of the film.*
Target Audience: Rating: G; for all ages admitted.
UPC: 786936847680
Hold
Blu-ray + DVD
0 of 15 available
Save to List
Tom Hanks, Tim Allen, Joan Cusack, Ned Beatty, Don Rickles, Michael Keaton.
Blu-ray, wide screen, described video; requires Blu-ray player.
English, Spanish or French dialogue; Spanish or French subtitles; subtitled for the deaf and hard of hearing (SDH).