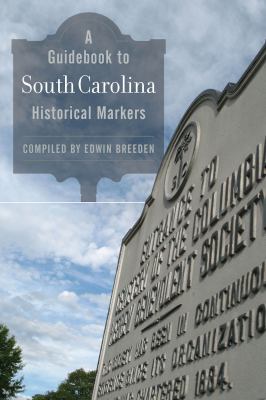 Breeden, Edwin, compiler.
Format: Book
Description: pages cm
"The official state marker program dates to the 1930s, though sporadic efforts existed even earlier (and those early markers are also included in the text). The program, however, was formalized in 1936 when the Historical Commission created the HistoricalMarkers Survey, the first systematic state effort to mark South Carolina's historically significant places, and the forebear to today's S.C. Historical Marker Program. The survey's creation came amid a wider movement to mark places of historical significance, spurred partly by the rise of the automobile and desires to boost local commerce and tourism. Beginning in the 1920s and continuing after World War II, states across the country began erecting historical markers along well-traveled highways, hopingto entice drivers to stray from their planned route, educating themselves on the area's past and contributing economically to its present. As elsewhere, South Carolina's markers were often placed in the right-of-way and erected in coordination with the State Highway Department, now the South Carolina Department of Transportation (SCDOT). Many aspects of this early program-some of them later abandoned-were modeled on Virginia's successful marker program, established in 1927 as one of the first in the country. This volume offers comprehensive coverage of every marker approved by the South Carolina Marker Program from its inception until the present day, more than 1,700 marker texts in total. All marker texts are recorded faithfully, as they appear on the marker itself, including occasional oddities of punctuation and style necessitated by the space constraints of the marker form. The guidebook includes subject indices for Colonial History, the American Revolution, the Civil War, Reconstruction, World Wars Iand II, African Americans, Native Americans, Women, Agriculture, and Industry. Markers stand at sites that are well-known and those that are nearly forgotten, if not for the silent cast iron sentinel that tells the stories of the people and events that once inhabited the place. One of the remarkable trends that the program has undergone over the years is that it has become more inclusive in the topics it covers. Older markers, though hardly homogenous, nonetheless disproportionately reflected those facets and interpretations of the past that most appealed to white South Carolinians. Decades passed before markers began to acknowledge places for their important associations with African Americans, a group of people who collectively represented a majority of the state's population until the 1920s and who continue to represent a significant portion of South Carolina's citizenry. That gap, while by no means closed, has greatly narrowed in recent years, to the point that roughly half of the new markers approved annually focus on African American history. As a collection, the markers record not only the history of the state, but also the stories that South Carolinians have told about themselves over the years"-- Provided by publisher.
Other Authors:
South Carolina. Historical Marker Program.
Subjects:
South Carolina. Historical Marker Program.
Historical markers -- South Carolina -- Guidebooks.
South Carolina -- History, Local.

Hold
Book
0 of 5 available
Save to List
Includes index.