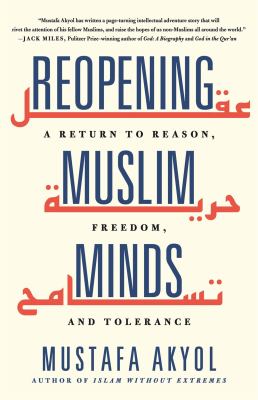 A Return to Reason, Freedom, and Tolerance

Akyol, Mustafa, 1972- author.
Format: Book
Edition: First edition.
Description: xxvi, 308 pages : illustration ; 22 cm
"A fascinating journey into Islam's diverse history of ideas, making an argument for an 'Islamic Enlightenment' today. In 'Reopening Muslim Minds,' Mustafa Akyol, senior fellow at the Cato Institute and opinion writer for The New York Times, both diagnoses 'the crisis of Islam' in the modern world, and offers a way forward. Diving deeply into Islamic theology, and also sharing lessons from his own life story, he reveals how Muslims lost the universalism that made them a great civilization in their earliercenturies. He especially demonstrates how values often associated with Western Enlightenment - freedom, reason, tolerance, and an appreciation of science - had Islamic counterparts, which sadly were cast aside in favor of more dogmatic views, often for political ends. Elucidating complex ideas with engaging prose and storytelling, 'Reopening Muslim Minds' borrows lost visions from medieval Muslim thinkers such as Ibn Rushd (aka Averroes), to offer a new Muslim worldview on a range of sensitive issues: human rights, equality for women, freedom of religion, or freedom from religion. While frankly acknowledging the problems in the world of Islam today, Akyol offers a clear and hopeful vision for its future"-- Provided by publisher.
Contents: A SELF-MADE MAN: HAYY IBN YAQZAN -- WHY THEOLOGY MATTERS -- ISLAM'S "EUTHYPHRO DILEMMA" -- HOW WE LOST MORALITY -- HOW WE LOST UNIVERSALISM -- HOW THE SHARIA STAGNATED -- HOW WE LOST THE SCIENCES -- THE LAST MAN STANDING: IBN RUSHD -- WHY WE LOST REASON,REALLY -- BACK TO MECCA -- FREEDOM MATTERS I: HISBAH -- FREEDOM MATTERS II: APOSTASY -- FREEDOM MATTERS III: BLASPHEMY -- THE THEOLOGY OF TOLERANCE.
Subjects:
Islam -- History.
Islamic civilization.

Hold
Book
0 of 1 available
Save to List
Includes bibliographical references (pages 238-296) and index.

The Islamic Jesus : how the king of the Jews became a prophet of the Muslims
Akyol, Mustafa, 1972- author.