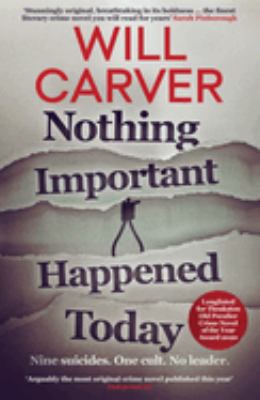 Carver, Will (Detective fiction writer), author.
Format: Book
Description: 287 pages ; 20 cm
"Nine people arrive one night on Chelsea Bridge. They've never met. But at the same time, they run and leap to their deaths. Each of them received a letter in the post that morning, a pre-written suicide note and a page containing only four words: Nothingimportant happened today. That is how they knew they had been chosen to become a part of The People Of Choice: amysterious suicide cult whose members have no knowledge of one another. By the morning, People Of Choice are appearing around the globe. It becomes a movement. A social media page that has lain dormant for four years suddenly has thousands of followers. The police are under pressure to find a link between the cult members, to locate a leader that does not seem to exist. But how do you stop a cult when people don't know they're members?"-- Provided by publisher.
Subjects:
Suicide -- Fiction.
Cults -- Fiction.